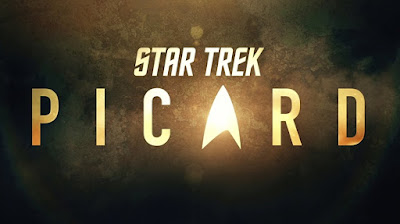 Like most of the rest of Trek Fandom, I was massively hyped and excited at the news that Patrick Stewart was returning to his iconic role of Captain Jean-Luc Picard and was counting the days until it dropped and now that it's all over, let's talk about it. I'll be honest- this isn't going to be a conventional review, because if you want one of those you can look all over the internet to find them. I am a Star Trek fan and, well, kind of a nerd, so this is going to be strictly from that point of view- and yes, I'll try and keep spoilers to a minimum, but no guarantees- so if you haven't watched it yet, go do that and then come back and read the rest of this post.

So, what did Star Trek: Picard do well?

First, it brought us back to the 'Prime Universe' to see what happened after the Romulan Supernova. Trek fandom had been clamoring for this for awhile- Discovery's vault to the far future not withstanding, many people were over yet another prequel series, so it's nice to get back to the Prime Universe and see what's going on. As it turns out, it's far darker and far messier than we left it. The Romulan Empire has been shattered. The Federation has turned somewhat inward (thanks to a devastating attack on Mars by some rogue synthetics) and now Retired Admiral Picard is running his vineyard while simultaneously hiding and being haunted by various ghosts of his past mistakes.

What a great place to start, from a storytelling point of view. What a great evolution for that character- he's not in Starfleet anymore. He's not the Captain of the ship. Plus, he's old and retired and fighting the perception of "oh great, the old man's lost his marbles." This immediately establishes that this isn't going to be TNG: The Next Generation and it's awesome that they do it right out of the gate.

Second, I think it got the 'fan service' balance almost exactly right. As soon as this was announced, the obvious question was: WILL WE GET TO SEE EVERYONE ELSE? The answer is, of course, no- but the people they do bring in, they do so organically and in a way that makes perfect sense for the overall story that they're trying to tell. It doesn't feel awkward or forced in any way. Also: I LOVED IT.

Third, The Riker and Troi of it all: I've always thought that both Counselor Troi and Doctor Crusher were massively underwritten and underserved characters over the course of TNG. (They both had their moments- 'Face Of The Enemy' for Troi and 'Remember Me' for Crusher are probably standouts, imo.) But, Marina Sirtis in 'Nepenthe' not only gives the best performance of that episode, but also gets one of the best Troi episodes ever written. It's beautiful and there's a mildly spoiler-y moment that I won't entirely spoil, but when she opens the door to the spare bedroom and you see everything right there on her face and she doesn't say anything. Absolutely amazing.

Fourth, the genius move: bringing in Jeri Ryan to reprise her role as Seven of Nine. Her performance is absolutely incredible- because she manages to show Seven's growth and evolution over the past two decades while throwing in just really subtle touches here and there to show that while she's changed- she hasn't changed that much. To me, the standout moment of this first season came at the end of 'Stardust City Rag'- when she quietly asks Picard if he felt that he ever fully regained his humanity after being freed from the Collective. At first, he says 'yes' but she sees through that answer and after a moment he admits, 'no' and she agrees, but says she's trying her best to, every damn day. If there's a Hall of Fame for perfect moments in the entirety of the five decades of this franchise, I'd put that moment right up next to, "I have been and shall always be... your friend." and "Computer, delete that entire log." It's just such a moment of blinding honesty between those two characters and what they've been through- I know writing on Trek can be hit or miss sometimes, but when you've got a writer like Michael Chabon on board, it's almost kind of an unfair advantage- it certainly elevates the quality of the writing to another level.

Finally, a character gets a much better and much sweeter final goodbye. (Again, it's spoiler-y. You probably know who it is by now, but if you don't- go watch it.)

If I have a quibble with this- it might be the end. They kind of make it obvious where they're going to go with it, but the more I think about it, the more I actually kind of like it, because it's essentially a metaphor for Picard's healing. He's put his ghosts to rest. He's not broken- or at least, less broken than he was at the start. He's ready to get out there and live again. What that entails will have to wait for Season 2.

Overall: A beautiful return to the Prime Universe of Trek and don't believe the reviews calling it 'so-so'-- if you love Trek and love these characters, you'll love this. My Grade: **** out of ****