Bookshot #129: 1971 A Global History of The Creation of Bangladesh 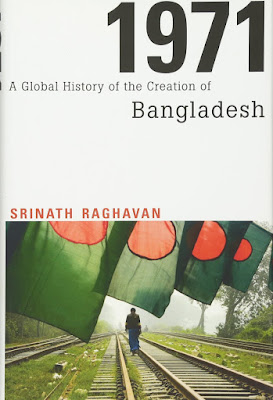 I listened to an interview with Srinath Raghavan a few months back on the podcast The Seen and The Unseen and when they talked about this book and it seemed like a must-read to me, so when I got some birthday cash to spend a couple of months back, I ran down a copy on Amazon and snagged a copy to see if it lived up to the hype of the interview and you know what? It absolutely did.

(Mild Tangent Time: Why the sudden interest in the geopolitics and history of South Asia? Well, to be honest, it's about a potential future. I don't know if I'll ever go back to get the PHD, but since my Master's Thesis focused so much on the politics of South Asia, it makes sense- at least to me, to keep expanding my knowledge base in the area, just in case.)

What I know about 1971 mainly comes the biography of Indira Gandhi (by Katherine Frank) I've got kicking around on the bookshelf. There, 1971 is portrayed as Indira Gandhi at the height of her powers- her greatest victory which helped her assume full control of the Congress Party. It changed the geopolitics of South Asia: no longer was there a West Pakistan and an East Pakistan- there was a new nation of Bangladesh.

What Raghavan illustrates, however is just how complex the crisis actually was and how the independence of Bangladesh wasn't inevitable at all. Compromise on the part of West Pakistan could have short circuited the crsis at multiple points along the way to out and out war. The complexities of Pakistani politics are fascinating to delve into: the military wasn't about to hand power over to a civilian government lead by the Awami League. The West Pakistan politicians weren't about to hand over power to the Awami League either. But, as Bhutto's behavior throughout the crisis showed- they weren't about to pass up an opportunity to weaken the army's hold over West Pakistan's institutions either.

Provoking the political crisis, in turn, provoked an economic crisis as the Bangladeshis shut down jute production which in turn deepened the economic crisis into a liquidity crisis- West Pakistan was literally running out of money. (You could also argue that without major political reforms at this point, the entire concept of West-East Pakistan was unsustainable- which proved to be the case.)

The United States was more concerned about keeping West Pakistan happy so they could keep an open door to China- Kissinger was working on opening China right as this crisis was emerging. Neither he nor Nixon were fans of the Indians or Indira Gandhi- though Raghavan points out that Nixon/Kissinger were making more out of this crisis than they needed too- worrying about a wider Cold War conflict when, behind the scenes, it turned out the Soviet Union was doing just about everything it could to encourage India not to let this crisis spill out of control into a war.

India, for their part were initially content to sit back and watch- until the Pakistani's army campaign in Bangladesh touched off a massive refugee crisis. From there, their biggest concern- other than how they were going to handle the refugee crisis, was China, oddly enough. China had it's fingers in some Maoist organizations in Bangladesh and had been supporting the Naxalites in the region, so India was rightly worried that if they didn't do something, China would get a foothold next door- or at the very least, an ideologically friendly neighbor. But the conundrum for India seems to have been the question of how much they could do. They didn't want to do too much and risk touching off a Chinese intervention. (The interesting thing is that Pakistan and the United States had much the same read, though the latter was convinced that India was going to use the independence of Bangladesh to wipe Pakistan off the map entirely and open a conflict on the Western front, when there is scant evidence to suggest that India was interested in that fact.  China, for their part, was kind of preoccupied with both it's conflict with the Soviet Union and it's own messy internal politics at the time.)

Raghavan's point with this book is to illustrate how truly global the crisis of 1971 actually was. He more than proves his thesis over the course of this book and demonstrates how right down to the final days of the war, the conflict was global in nature. India actually hurried up to grab Dhaka to end things unconditionally once Nixon deployed the 7th Fleet into the Bay of Bengal. The seeds of Bangladesh's instability were also sown in the midst of this conflict, as distrust between the freedom fighters and the army and the government would eventually result in a military coup a few years after independence.

Overall: A fascinating, in-depth look at the complexities of the Crisis of 1971, this book deserves all that praise that it gets. The research is meticulous. It's well organized. It states it's thesis and more than proves it. And if you're looking to learn more about the post-independence politics of South Asia, this is a book you can't afford to miss. My Grade: **** out of ****