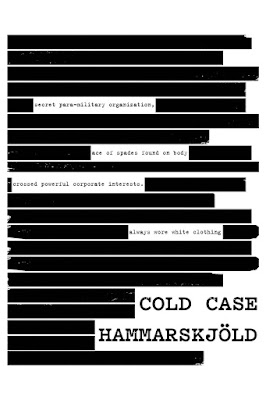 I fell down one of those Buzzfeed listicle rabbit hole about 'cool new movies' you can watch on [Insert Streaming Platform Here] and came across this fascinating documentary about a Cold War incident that I knew about in passing, but not much more. Cold Case Hammarskjold is somewhat unusual for documentaries that I've seen because it puts the director, Mads Brugger in front of the camera

Brugger spends most of his time in two hotel rooms, dressed all in white and dictating the "story" of the documentary to two African 'secretaries' typing on old school typewriters. He tells the basics of the story: then UN Secretary General Dag Hammarskjold was working to resolve a crisis in the Congo, involving a breakway state called Katanga- which was headed at the time by a man called Moise Tshombe who was backed by Belgian and European mining interests. (There was a lot of mineral wealth at stake- and there still is today.) Hammarskjold wanted to maintain the territorial integrity of the Congo- and, as the movie reveals actually seemed to be like a fairly decent guy that wanted newly independent African countries to be just that- truly independent.

Instead, his plane went down near Ndola in what was then Northern Rhodesia, but what today is Zambia. And that's where the mystery begins. Brugger teams up with Goran Bjorkdahl, who received a metal plate from his father believed to be a piece of Hammarskjold's plane. They develop the theory that the plane was shot down by a Belgian mercenary after a bomb that was placed aboard the plane after it departed from Lubumbashi failed to detonate. Their revelations trigger a new inquiry into the incident- and as part of that, it's revealed that the piece of metal isn't actually authentic.

Not deterred, Bjorkdahl and Brugger locate what they believe to be the burial site of the wreckage of the plane and make a comical attempt and excavating it- but, despite the fact that it appears to be well away from any critical airport operations, the authorities step in and stop them.

Another clue leads them to South Africa, where the Truth and Reconciliation Commission during their hearings in 1998, they reveal a document with an outlike for the assassination of Hammarskjold that makes references to a mysterious organization known as SAIMR, the South African Institute for Maritime Research.  It's purported leader, Keith Maxwell fancied himself a military man and dressed all in white. (Which is why Brugger dresses all in white as well, because that's what his 'villain' does, as well.)

This is where the movie gets crazy- because not only does what they find out about SAIMR bolster their idea that mercenaries shot down, but they more they dig into Maxwell, the creepier it gets. He ran multiple medical clinics in black townships in South Africa, though he was not a medical doctor. He had an obsession with the AIDS virus and they hear claims that SAIMR ran operations to spread HIV to Africans to turn the then white minority into a white majority. (That may have been SAIMR's intention, but medical evidence on the feasibility of that idea is scant indeed and largely dismissed by most credible Doctors- which the movie doesn't hide.)

The movie ends with Bjorkdahl heading upriver to find out more about Maxwell and Brugger reflecting on the loss of Hammarskjold and how Africa might have been different today if he had lived.

Overall, conspiracy theories are tricky things- but the crazy part about this movie is that the evidence that they present is actually quite convincing. Yes, maybe- maybe, a plane crash is just a plane crash, but given the politics of the time and the threat that Hammarskjold represented to corporate and other interenational interests, the idea of his plane being shot down is actually pretty plausible to me. Where this movie wanders into the shakier territory is the stuff with SAIMR. They interview multiple sources and certainly do their homework, it's just that... when you talk about deliberately infecting Africans with HIV-- you're kind of getting into tinfoil hat territory, in my opinion. At the end of the day though, this is a brilliant documentary that almost feels like a real-life thriller/spy movie illuminating a part of the Cold War that few people in the United States probably know about. My Grade, **** out of ****