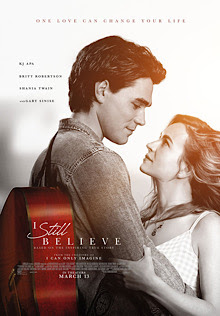 The Missus has been a fan of Jeremy Camp since before we met-- I remember in the very early days of our relationship listening to some of his stuff and her explaining what had happened to his wife and thinking that it sounded tragic and kind of amazing that he had found inspiration out of tragedy. So, when we first saw the previews for this movie, she had her heart set on a date night to go see it in theaters- but alas, pandemic intervened so we had to settle for an early digital on-demand release on Amazon Prime.

I Still Believe begins with Jeremy Camp (K.J. Apa) packing up and taking his a brand new guitar that's a gift from his parents Tom (Gary Sinise) and Terry (Shania Twain) and heading out to college in California. (It's not specified which college he's going too, but it's a Christian one- which makes sense, for obvious reasons.) Moving in, he encounters an attractive woman who turns out to be Melissa, his future wife. (Britt Robertson) He also sneaks backstage of a concert to get some advice from a fellow musician, Jean-Luc Lajoie (Nathan Parsons) who, as it turns out, is also interested in Melissa.

Despite her best efforts, eventually Melissa is forced to concede that she and Jeremy do have a connection, but she also doesn't want to hurt Jean-Luc and pushes Jeremy away. He goes home for Christmas back in Indiana and gets a call from Jean-Luc who lets him know that Melissa has been rushed into hospital. Jeremy drives back to California to be with her and finds out that she's got ovarian cancer and it's stage four and she's dying.

After some prayer and lots of contemplation and a talk with his parents, Jeremy decides to propose to Melissa and she accepts. While this is all going on, Jeremy's career is starting to build and take off as he performing to larger and larger audiences and asking everyone to pray for Melissa's health along the way- and they get some respite: after deciding against surgery which would have made it impossible for Melissa to have children, the cancer goes into what appears to be remission. Jeremy and Melissa get married and go on their honeymoon, but their respite is short-lived: her cancer comes back, worse than before and four and a half months after they're married, Melissa dies.

Her death severely tests Jeremy's faith and in a moment of anger he smashes his guitar, finding a letter she left him, hoping that some day, when he's grieved enough, he will pick up his guitar again- and inspired by that, he does. The movie ends with Jeremy sailing out to the ocean to see the stars- something Melissa had reccommended he do and then, after a performance at a music festival, a woman introduces herself as Adrienne (Abigail Cowen) and tells him that she had actually seen him perform at a concert where he had asked the audience to pray for her and how moving and inspirational she had found it. Jeremy thanks her and then heads to his trailer. (Turns out, Adrienne ends up being his second wife.)

The movie ends with the real-life Jeremy Camp and Adrienne talking about Jeremy and Melissa's story and a little bit about their lives and faith after that.

Overall: There are a growing number of what mainstream entertainment culture would probably call "Christian movies" and purely as movies, I haven't been super impressed with the ones I have seen so far- until now. Given the large disparity between the Audience Score and the Tomatometer, you would have to assume that a lot of critics aren't quite buying into them yet either- but that's a mistake, because this was a genuinely good and honestly inspirational movie. I'd have to watch I Can Only Imagine to see if my hypothesis is correct, but I think when these movie just tell stories of faith and don't try and make political points (see: God's Not Dead, etc.) they work a lot better, not just for the Christian audiences they're aiming for, but for more mainstream, secular audiences as well.

I Still Believe was a genuinely good movie. There's a ton of natural chemistry between K.J. Apa and Britt Robertson that makes their relationship seem very real and loving. Gary Sinise is a solid presence in everything I've ever seen him in. I don't know if this was Shania Twain's first movie role- and honestly, she didn't have a huge part to play in it, but she was great in every scene she was in.. (I wouldn't mind seeing her in more movies, to be honest.) My Grade: **** out of ****