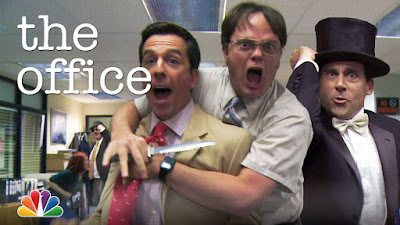 Well, I did it.  I finished The Office.

The Office had eluded me for years. It was one of those shows that I couldn't quite get into-- I tried a few times and just sort of petered out after half a season or so. I started fresh this time and stuck with it- and honestly, once you break through that first season or so, it's smooth sailing- especially once you get into the Jim and Pam of it all. And honestly, at this point I've seen so many GIF/memes and references to it online, it sort of felt incumbent upon me to actually sit down and watch the show, if for no other reason than to finally understand all the references for once.

I think the thing that blocked me the most was Michael Scott (Steve Carrell), especially in the early going. At first, he just seemed like an incompetent dick of a boss, who was so massive oblivious to modern workplace etiquette that you just thought there could be no possible way he would last in that position for as long as he had up until the show began. I have to wonder if part of that was influenced by Ricky Gervais and his performance on the British (and original version of The Office, which I haven't seen.) Whether Gervais and his performance undergo a similar evolution I don't know- and when it happens, I couldn't quite tell you, but I feel like once Carrell really gets to grip with the character, you begin to see just how much he genuinely cares about his co-workers/subordinates.

Similarly, Dwight (Rainn Wilson) is also a really underrated character throughout the show. I mean, he's funny and awesome and an integral part of the show for comedic reasons- but it's those little, subtle moments that play against character that show how good of a friend he can genuinely be. Especially to Pam- but also, to some degree with Angela.

Jim and Pam...  best sitcom romance? I mean, they've got to be up there on any definitive list, I think. Once they get together, it's sweet and just great- and the chemistry that Krasinski and Fisher have really becomes the heart of the show over the seasons in many ways. Their storyline in the final season I found to be a bit annoying and seemingly out of character in many ways-- but they pulled it together by the Finale and it all worked pretty well at the end of it all.

Once Carrell leaves, there's a dip in general quality and overall, 'do I give a damn about this' in Season 8, but Season 9 everyone sort of seems to come together and finishes on a high note- well, relatively high note. I didn't know how to feel about the revelation that they're actually being filmed for a documentary that they all get to see-- I mean, as a concept, it makes sense and it's kind of a cool meta thing, but the way they introduced it-- as part of Jim and Pam's marital strains of the final season irked me somewhat, despite the fact they made it pretty cool by the end of the show.

At some point, I suppose I'll have to sit down and watched the British version of the series-- which thankfully, isn't nine seasons long, but looking back at the last 20 years or so I don't think you can name me another sitcom as influential and as impactful as The Office. Parks and Recreation might come close and we can argue about the current state of the 'sitcom' in the television landscape a bit too. But in terms of memes, characters, gifs and what a lot of actors from The Office have either gone on to do or continued to do, I think I've got to give The Office a nod.

(Modern Family, How I Met Your Mother, Scrubs, 30 Rock would all be on that list somewhere- and I suppose Louie too.)

There's probably too many moments to pick just one great one: when Michael leaves and moves to Colorado to be with Holly and Pam catches up with him in the airport to say goodbye and takes her mic off, so we don't actually hear what they say to each other. Jim and Pam's wedding. Jim and Pam's proposal. Any prank involving Dwight. Threat Level Midnight, the Movie. The whole Dinner Party episode which is widely hailed as one of the show's best lives up to the billing. One that stands out in the later season though and made me laugh out loud was when Andy was finally coming back from his boat trip and Kevin revealed that he had been drinking Andy's milk for three months, just to be a dick to him and says he's sad about not having any more 'chunky lemon milk' to drink and I don't know why, but I laughed so damn much at that.

Overall: If you're looking for a Mt. Everest of a sitcom to binge and haven't watched The Office yet, get to it. It's worth a binge and I have a feeling it's destined for NBC's new streaming service, the ridiculously titled Peacock and thus will be lost to Netflix forever. So, don't wait, binge now. My Grade: **** out of ****