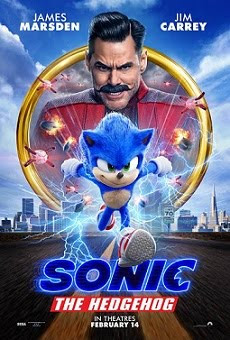 So, the Eldest Spawn is a major fan of Sonic the Hedgehog- when his DS was actually working* he could play the video games- the old school ones and loved every minute of it and then followed that up with the cartoons on Hulu- both the new and old school ones. So- and it seemed like a million years ago now, what with all this pandemic going on- it was actually maybe a month ago- that we went to see Sonic The Hedgehog the movie. In theaters. On the big screen.

Sonic (Ben Schwartz), is, of course, a blue hedgehog who can run at supersonic sepeeds. He's sheltered as a child by his guardian Longclaw, an owl (Donna Jay Fulks), who wants to protecth im from a tribe of echidnas for his power. When they catch up to him one day, Longclaw gives him a bag of rings that can create portals to other planets and he flees to what turns out to be Earth while Longclaw sacrifices herself to protect him from the echidnas.

Ten years later, and a now grown-up (or at least older) Sonic is enjoying a secret life hiding in the wood near the town of Green Hills, Montana- but he's lonely and wants to make friends. He idolizes the local Sheriff Tom Wachowski (James Marsden) and his wife, the town vet, Maddie (Tika Sumpter) but doesn't realize that they're wanting to relocate to San Francisco soon.

One night, he gets upset at his lonlieness while he's playing baseball by himself and runs at supersonic speed which triggers an electromagnetic pulse that knocks out power across the Pacific Northwest and naturally attracts the attention of the government, who enlist the Roboticist and scientific genius Doctor Robotnik (Jim Carrey) to uncover the source. Robotnik eventually does find Sonic, who hides in Tom's house. When discovered, Tom accidentally shoots him with a tranquilizer and Sonic loses his rings on top of the Transamerica Pyramid in San Francisco.

Tom agrees to help Sonic retrieve his rings and evade Robotnik and eventually they get his rings back, but not before Sonic loses a quill and Robotnik realizes the immense power it contains and now has a new quest: harnassing and stealing Sonic's power for himself. One final confrontation takes place back at Green Mills: in short order, Robotnik is defeated and banished to another world where he loses his mind and shaves his head. (Presumably to return for the inevitable sequel.) Sonic moves in with Tom and Maddie- who decide to stay in Green Mills, but at the very end of the movie another ring portal emerges and Tails pops out, looking for Sonic.

So, I did a little research on this one and the number of films based off of video games is much larger than I realized. I can't say I've done a comprehensive survey of the ouevre, but over the years I've watched enough of them to have what I would call a fairly decent sample and the quality overall can be somewhat hit or miss. In my defense, I have yet to see Detective Pikachu or Warcraft yet- I've heard good things about both- but I will say this: Sonic The Hedgehog isn't just a good video game movie, it's a good movie full stop.  In fact, I'd say in terms if video game movies only, I would consider Sonic to be a great video game movie.

The cast is solid. Jim Carrey is back in fine form with his performance as Robotnik. James Marsden is his usual charming self- and I don't mean that sarcastically. Ben Schwartz imbues Sonic with a certain amount of soul and emotion that really makes the view fond of the speedy little guy. Overall: Entertaining, a great movie bringing one of the iconic video games characters to the big screen. My Grade: **** out of ****.