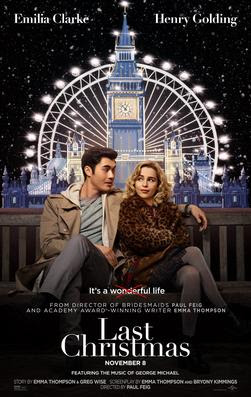 Because we're parents, the Missus and I get to see many trailers for many movies that we say, "Oh man, we should go see that one" and that inevitably never happens, because life and kids. Occasionally, we'll get back around to one of them usually courtesy of Redbox or a streaming service- and Last Christmas turned out to be one of those movies.

The movie opens with Kate (Emilia Clarke) heading to her job as an Elf at an all-year Christmas shop in central London. The owner (Michelle Yeoh) calls herself Santa. She's also currently homeless having been thrown out by her flatmate. While at work, she notices a man outside the shop staring upwards- she talks to him and finds out his name is Tom. (Henry Golding)

After an unsuccessful audition, Kate sees Tom again and they go for a walk, Kate being charmed by his unusual observations of London-- when she isolates herself from her oldest friend, she's forced to return to her parents' home. They're immigrants from Croatia- and her mother, Petra (Emma Thompson) suffers from depression and her father Ivan (Boris Isakovic) works as a cab driver because he can't afford to retrain to practice law in the United Kingdom. Kate feels over protected by her mother and resents the fact that she dotes on her more successful sister, Marta. (Lydia Leonard)

Kate begins spending more time with Tom, who rides a bike and volunteers at a homeless shelter- he tells her that he keeps a phone in a cupboard somewhere and not on his person, but still disappears for days at a time. Kate begins helping at the shelter in hopes of running into him, but none of the staff seem to know who Tom is.

Still rebellious and messed up and back home to celebrate her sister Marta's promotion, Kate spitefully outs her as a lesbian and ends up fleeing her parents' house only to find Tom again. They end up spending the night together and although she tries to initiate sex, he declines- and she reveals that a year before, she was seriously ill and had to have a heart transplant. After that night, Kate begins to try and clean up her life. She sets up Santa with a Danish man who loves Christmas as much as she does. She mends fences with her sister and family and begins busking to raise money for the homeless shelter.

She also finally finds out the story behind Tom. (Which is kind of a major plot point that I'm not going to reveal for spoiler-y reasons.)

The movie ends with Kate performing a solo of the Wham! song 'Last Christmas' at a fundraiser/Christmas show for the Homeless shelter. Later, Kate and her family- including Marta's girlfriend celebrate Christmas together.

Overall, I found this movie to be absolutely charming. Emilia Clarke is great in what I think has to be one of her first post-Game of Thrones roles and her chemistry with Henry Golding is great. I didn't expect Emma Thompson to be in such a relatively minor role, but she's really great as Kate's Mom-- and Michelle Yeoh- who is great in just about everything she's in is another brilliant bit of casting for this movie. You can maybe argue and say that perhaps we don't need yet another romantic comedy set at Christmas, but you'd be wrong  This movie is just too charming not to like. My Grade: *** out of ****