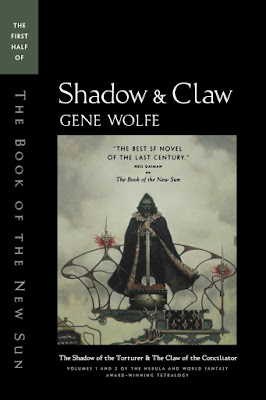 Gene Wolfe has been on my list of authors to read for a long time. My parents used to have a copy of all these books, but somewhere along the way it vanished. I tried to pick it up from the library a couple of years ago and realized almost immediately that it was going to take far longer than two weeks to get through and finally, I just ended up snagging a volume with the first two novels, Shadow of the Torturer and The Claw of the Conciliator (Entitled in their combined form as Shadow & Claw) and plunged into the magnum opus of the author many considered to be one of the best science fiction authors of the 20th Century.

The first book, Shadow introduces us to Severian who is an apprentice of the torturer' guild who nearly drowns when swimming the River Gyoll which runs through the great city of Nessus where the Autarch rules. On his way back to the Citadel where the Guild is located he and a few other apprentices sneak into a necropolis where he meets Vodalus, a revolutionary dedicated to overthrowing the rule of the Autarch. He saves the life of Vodalus and a woman named Thea- and earns the trust of the revolutionary and a single gold coin.

When he's elevated to journeyman shortly after he encounters a woman named Thecla, a prisoner of the guild. A pawn in the effort of the Autarch to capture Vodalus (her half sister is Thea), Severian eventually takes pity on her and slips her a knife so she can kill herself. For this act of mercy he is disgraced and sent into exile to the distant city of Thrax which needs an executioner. They give him a letter of introduction to the leaders of the city and an executioner's blade, Terminus Est. Leaving, he travels through the decaying great city of Nessus and encountres a few people along the way. Baldanders and Dr. Talos attempt to get him to join their troupe of actors, but he declines- they, however, recruit the waitress at the inn, Jolenta. He goes to get new clothes to cover up his traditional garb of the torturer's guild and meets Agia. He's challenged to a duel and has to go get an avern- the plant leaf with sword like blades used for dueling. On the way with Agia, their driver crashes into the alter of a religious order and a relic goes missing.

Inside the gardens to get the avern, Severian falls into the a lake where they inter the dead and a young woman named Dorcas comes back up to the surface with him and joins his growing band of companions. He evetually goes to his duel, is stabbed by the avern but survives somehow and reunites with Dorcas. He is then requested for perform an execution- it turns out his challenger is the one that needs to be executed, Agia's brother. Agia flees, but Severian and Dorcas continue their travels, meeting up once more with Dr. Talos and Baldanders and that's when Severian finds the relic that went missing when they crashed into the altar: the Claw of the Conciliator.  They head out to the gate of Nessus to head out of the city and there's a large commotion and the book abruptly ends.

This leads us to the second book, Claw. The story picks up shortly after the end of the first book moving a little while past the events at the gate to the town of Saltus. Severian has been separated from the rest of his party and pauses there to wait and perhaps find them. He practices his 'art' on two people- including an accused servant of Vodalus. In the crowd at the execution he sees Agia again and tries to follow her- but is unable to do so. He returns to the town and executes a woman accused of being a witch. Then, eating dinner with his friend Jonas (who he met back at the commotion at the gate at the end of the first book) he gets a letter than he believes to be from Thecla (but actually, it's from Agia) who lures him to a nearby cave where he's attacked and barely escapes from a group of man-apes. The light from the Claw stops the attack, but also wakens something else in the cave. Ultimately, Agia reveals herself and Severian is unable to execute her and let her go.  He and Jonas are captured by Vodalus' men shortly after.

Severian then absorbs the memories of Thecla and ends up captured in House Absolute, the domain of the Autarch. Jonas turns out to be a robot who crashed landed here and promises to return for Jolenta when he is fully healed. He then disappears and Severian stumbles into the gardens of House Absolute where he is reunited with Dorcas, Dr. Talos and Baldanders and they perform the play again- but then Baldanders goes crazy and attacks everyone revealing aliens among them and the band goes their separate ways-- Severian, Dorcas and now Jolenta heading north toward Thrax again.

Along the way, they have to pass thorugh a mysterious stone city where they confront witches and ghosts and meet one of Voldalus' servants once more- but only Dorcas and Severian make it out alive- at least, as far as they know.

Okay, so right away: these books are dense.I hate to spend so much detailing the basic plot, but it just...  sort of demands it. You gotta love books that are nearly impossible to condense down, right? Second thing that immediately jumps out is the level of detail that went into the world building for these books: the language especially jumps out at me. Wolfe has notes at the end of the volume which detail the system of currency (chrisos/orichalks, etc) but the words are also fundamentally different. 'Destriers' seems to indicate horses/riding animals of some kind. 'Cacogens' seems to refer to the aliens that show up at the end of the book. All of this seems relatively subtle in the grand scheme of these novels, but the reality of it allows Wolfe to obscure the true setting. The 'Urth' of the books with it's dim and dying sun and cold landscape is actually a far future version of our own Earth.

That, I think is what makes these books so brilliant. They are, if you dig a little, science fiction in perhaps it's purest distilled form. But the way Wolfe writes them and stages them, you initially allow yourself to think that this is a fantasy novel- because large portions of it read that way in a sense. But as the book goes on and you get more and more references to aliens and robots where exactly you are, the veil of the fantasy is lifted and you realize you're in an Earth so far removed from our own it may as well be an alien world somewhere else. The end result is stunning and very worthy of the hype surrounding the author and these books.

Overall: These books are amazing. If you don't think science fiction or fantasy can be "real literature" Gene Wolfe has some books you can read that will 100% change your mind. Absolutely masterful stuff. My Grade: ***** out of *****