This Week In Vexillology #274

October 27, 2018
This Week In Vexillology, we're continuing our tour of the counties of England with the next two counties on deck: Sussex and Surrey.

Finding these two counties is remarkably simple: Find London on a map and head southwest until you spot Woking, Guildford or Epsom and you've found Surrey. Find London on a map and head dead south and when you get to Crawley you've reached the north of Sussex (or alternatively, just find Brighton.) As a nice alternative to both those things you can just Google them on your Google maps, but you should know by now that I enjoy maps as well as flags...

First up, the flag of Sussex:

(Technically speaking there's two parts to Sussex- a West Sussex and an East Sussex- but together they're traditionally seen as one county and that's what this flag represents.) Officially adopted on May 20 2011, it's named St. Richard's Flag, which was named after the patron Saint of the county, Saint Richard of Chichester and it's based on the traditional emblem of the county, six gold martlets on a blue field. (What are martlets you might ask? Well, that's a good question- they're a stylized bird similar to that of a swift or a house martin.)

There was some uncertainty as to where this symbol came from. It was used in 1611 to represent the Kingdom of the South Saxons by the cartographer John Speed- but there seems to be a firmer consensus that it's origins were from the Coat of Arms of the 14th Century Knight of the Shire, Sir John de Radynden.

Next up, the flag of Surrey: 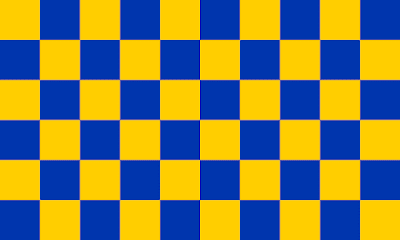 Officially registered as a traditional design in 2014, the blue and gold checkered flag of Surrey has ancient roots that date back almost to the Norman Conquest of 1066. It's taken from a personal heraldic device used by the very first Earl of Surrey all the way back in 1088. Other references include the 13th Century Glover's Roll of Arms, which included an account of the siege of Caerlaverock Castle and described the Early of Surrey at the time having "his banner with gold and azure was nobly chequered."

Probably my favorite of the references described in the flag's wiki-page is from a poem written is 1627 about the Battle of Agincourt, which references a banner that the men of Surrey carried into battle: "The men of Surrey, checky blew and gold, (Which for brave Warren their first Earle they wore."