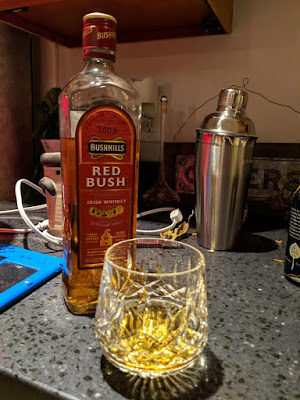 The other half of my birthday haul, Bushmills Red Bush was launched last year in the United States and has been a pretty constant presence on grocery and liquor store shelves ever since. It's aged in first fill bourbon barrels which helps add to the overall sweetness of the whiskey and (I'm just guessing here) probably has a lot to do with the beautiful amber/deep red color of the whiskey as well. (Their website has a pretty good ten minute video introducing Northern Ireland and it's food and whiskey scene.)

Located in County Antrim in Northern Ireland, Bushmills has been around and kicking for four hundred years or so. The 1608 on the label of the brand refers to the date when a royal license was granted to allow for distillation in the area- but the company really got going in 1784. Throughout it's history there have been various periods of closure, but it's been continuously running now since 1885 when it was rebuilt after a fire.

Bushmills has more or less convinced me at this point: I need to get into more blended whiskies, especially from over in Scotland or Ireland. My experience so far has been nothing but good and while I can appreciate the complexities or strengths of single malts or bourbons, I think it's time to spread my wings a little bit. (After my experience with Roknar Rye earlier this year, I also want to try more rye!)

So what did it taste like? Here's what I came up with for tasting notes:

Nose: There's smokey aspect to it's that's hard to pin down- maybe brown sugar, but I'm not sure what it is. Weirdly, I also get a hint of bananas popping out here and there. Bananas and brown sugar with a little bit of a sweet smoke- like a cigar or pipe smoke.

Body: It's light- it sits so lightly on the tongue, it almost feels watery. There's a rush of the initial sweetness followed by spice- I want to say cinnamon here, but I can't pin it down.

Finish: It has a beautiful smooth finish. The warmth is gradual and then increases in intensity.

Overall: It's smooth, it's drinkable. I could drink this straight, on the rocks or use it as a mixer. Excellent, beautiful stuff from Bushmills. My Grade: **** out of ****