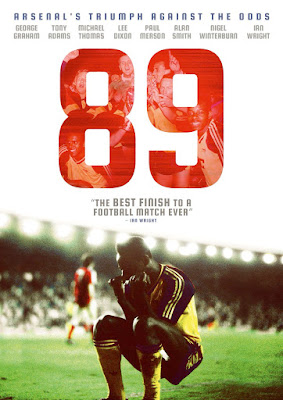 I hadn't discovered club soccer in 1989. Point of fact, I had barely discovered any kind of sports fandom at all. I was dimly aware of the NFL and the might and magic of Joe Montana, but it wasn't until the late 90s that I really began to pay attention to football and soccer. So I was only dimly aware (thanks to reading Nick Hornby's Fever Pitch more than anything else) of Arsenal's dramatic title win in 1989.

89 goes deeper into that magical season and assembles the legends from that Arsenal team to tell you all about it: Manager George Graham and players Tony Adams, Michael Thomas, Lee Dixon, Paul Merson, Alan Smith, Nigel Winterburn and Ian Wright tell the story of that season- their interviews and recollections intercut with footage of actual games, team meetings and team training sessions throughout the movie. If you're an Arsenal fan, it's like catnip going into it- and hell, even if you're a casual sports fan that enjoys a good sports documentary going into this movie, you're going to enjoy. It's a behind the scenes recollection of a season gone by- the game was different, the season was marked by the tragedy of Hillsborough- and all of this was before the Premier League even came into existence in 1992.

The tension of the documentary begins to rise the later in the season that it gets. Arsenal is close to catching mighty Liverpool and then weirdly, the stars align into something that's tailor made for the movies: it all comes down to the last game of the season when Arsenal was faced with the seemingly impossible task of going to Anfield and winning by two clear goals.

Right there is where the narrative should go completely off the rails. Liverpool at the time were running rampant throughout the First Division. The eighties had been their decade and they had shown no signs whatsoever of slowing down at any point in the season. It'd be the college football equivalent of, I don't know... beating Alabama in Tuscaloosa for the national title. Yeah, that'd be the closest thing I could think of. You might be Ohio State or Clemson, but you gotta go there. And you gotta beat them. Odds are going to be against you and the situation is grim.

Switching back to soccer, it's here that Manager George Graham made a tactical decision that most of his players found to be utterly crazy: he decided to travel up to Liverpool on the day of the game- trying to make sure his team didn't have too much time to think about the task at hand. It seemed crazy, but oddly enough, it actually worked.

The last portion of this documentary focuses on the game itself and the tension only rises as Arsenal gets one of the goals they need and then in injury time in dying seconds of the match on literally their last possible attack, they score the winning goal. It is quite literally like something out of a movie- it's that impossible. I mean, just look at this beautiful goal. It's amazing. The crazy part of all of this: none of it's fake. It's all real. And it's one of the most extraordinary moments in sports.

Overall: A must watch for any Arsenal fan, it's one of the best sports documentaries I've seen. If you like Arsenal, soccer or sports in general, you'll love this movie. My Grade: **** out of ****