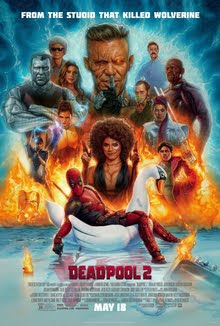 Deadpool 2 picks up two years after the end of the first film- Wade Wilson (Ryan Reynolds) has had a fantastic run over the course of the past two years- taking down every target that has been placed in his path. But when he returns home for his anniversary and fails to kill one of his targets, it leads to tragedy, as shortly after he and his girlfriend Vanessa (Morena Baccarin) decide to start a family, the missed target comes back and kills her. Wilson kills the man in revenge, but, blaming himself for her death, he attempts to commit suicide six weeks later by blowing himself up.

The pieces of his body are collected by Colossus (Stefan Kapicic), who puts Wilson back together and takes him to the X-Mansion to heal. Reluctantly, Deadpool agrees to join the X-Men and he Colossus and Negasonic Teenage Warhead (Brianna Hildebrand) respond to a standoff at a Mutant Reeducation Center, masquerading as a 'orphanage.' Deadpool, realizing that the young mutant named Russell Collins (Julian Dennison) has been abused by the staff, kills one of the staff members before being restrained by Colossus. He and Russell are taken into custody, fitted with collars that restrain their powers and taken to the Ice Box, an isolated prison for mutant criminals.

Meanwhile Cable (Josh Brolin), a cybernetic soldier from the future has traveled back in time to kill Russell before he starts his path to becoming the villain Firefist, who ends up killing cable's family. Breaking into the prison, attacking Collins. Deadpool's collar breaks in the melee and he attempts to defend Russell from Cable, though Cable takes Vanessa's skee ball token in the process. Near death trying to stop Cable, he has another vision of her urging him to protect Russell and stop Cable. He puts together a team called X-Force to stop Cable- members include Bedlam (Terry Crews), Shatterstar (Lewis Tan), Zeitgeist (Bill Skarsgard), Vanisher, Domino (Zazie Beetz) and Peter (Rob Delaney). Realizing that Cable will probably attack the convoy that Russell is being transported in, they launch an attack on it by parachute, but every member of the team except the lucky Domino is killed.

While they're fighting Cable, Russell frees the Juggernaut and they escape. Realizing that he should probably explain why he wants to kill a kid, Cable is talking into working with Deadpool and Domino to stop Russel's first murder and agrees to give Deadpool a chance to talk Russell down. Arriving at the orphanage, they're overpowered by Juggernaut while Russell attacks the headmaster- things aren't going so well until Colossus shows up to distract Juggernaut. Deadpool fails to talk Russell down and Cable shoots at him, intending to kill but Deadpool takes the bullet instead to reunite with Vanessa in the afterlife. Seeing his sacrifice, Russell decides not to kill the headmaster- and, his family saved, Cable uses the last charge on his time machine to go back and put Vanessa's skeeball token over Deadpool's heart, which saves his life and Russell still has a change of heart. Dopinder the Taxi Driver ends up running over the Headmaster and killing him.

This was a great sequel to the first Deadpool and the more I think about it, the more I actually like it better than the first one, which is probably what you should aim for if you're making a sequel. But here's the thing: this movie doesn't necessarily take the humor from the first one and dial it up to eleven, but what it does do is move beyond the usual formula for superhero movies-- this one is more complex, more well-rounded and has an explicitly stated theme of family, which actually holds up, albeit in a Deadpool kind of way.

The whole X-Force sequence is genius and the reference to Frozen will stick in your head for days, but this movie continues to get Colossus right and finally, finally gives The Juggernaut his due. Plus, the James Bond style opening with a Celine Dion song? Brilliant stuff.

Overall: An eminently worthy sequel, Deadpool ticks all the boxes: it's funny, it's profane, it's more complex, it makes the X-Universe better. Pass the chimichangas, please. My Grade: **** out of ****