This Week In Vexillology #273

October 20, 2018
This Week in Vexillology, we're continuing our tour of the counties of England with our next two counties on deck: Hampshire (the OG version that New Hampsire wishes it was) and the Isle of Wight. In terms of how to find them, well this time it's actually pretty easy: find a map of England and look for Southampton on the south coast, kind of south/southwest of London. Just north of it you're find Winchester, which is the seat of Hampshire (and a former capitol of England, way way back in the day) and south of there you'll see a smaller island just off the coast. That's the Isle of Wight. 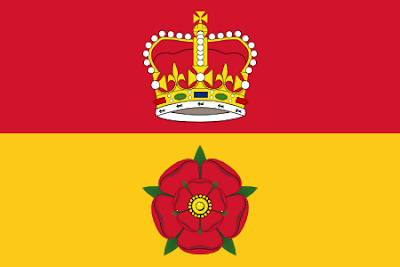 This is technically the flag of the Hampshire County Council and not the actual county itself- which means I think we've come to the first instance of a county not having a flag all to itself. This one was adopted on July 13th, 1992 after the county was granted a coat of arms to mark the 100th Anniversary of the county council which actually happened in 1989. It's a banner of arms, so the use of the Royal Crown required permission from the Queen and an official royal warrant was issued for it. The crown and rose motif has been associated with it since the 18th Century or so. (This website has some good information on the flag- and also an interesting variant proposal on the flag which replaces the Royal crown with a Saxon crown in a nod to Winchester's role as Alfred the Great's capitol in ancient times.)

There doesn't seem to be much more than that to the Hampshire County Council flag...

Next up, The Isle of Wight: 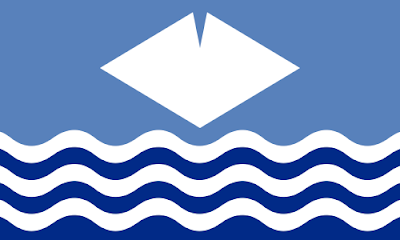 Adopted in January of 2009, the flag depicts the shape of the island hovering over the ocean waves. The indentation at the top of the diamond represents the River Medina, which is the largest river on the island. There are a couple of other flags of the Isle of Wight floating around out there- the county council flag features a representation of Carlsbrooke Castle surrounded by three gold anchors on a field of blue. Carlsbrooke Castle was the historic seat of the Governors of the Island and the blue field and the three gold anchor stand for the Island's status and maritime history. There's also a tricolor of green-white-green that Islanders have taken to calling The Rebel Green Flag out there as well.

The Isle of Wight might rank up there with Wiltshire as the most striking flag I've seen so far- in fact, I might go so far as to say it's my new favorite of all the counties in England I've seen. (I even like the fact there's a 'Rebel Green' flag for ornery folks that don't like the official one to fly.)

So there you have it, Hampshire and The Isle of Wight. Remember, until next time, keep your flags flying- FREAK or otherwise!