This Week In Vexillology #272

October 13, 2018
Our tour of the counties of England continues and we're creeping northward from Somerset and northeast from Dorset to take a look at the next two flags on deck: Wiltshire and Gloucestershire. Since we're kind of moving into the less obvious parts of England (and because, honestly, I've never known the counties of England nearly as well as I should) we might as well talk about where Wiltshire and Gloucestershire actually are.

(If you're from the UK, you can skip the next two paragraphs, for obvious reasons.)

Wiltshire: find London on your old Google Maps, zoom in a bit until you see the town of Reading off to it's west. Just to the south of Reading you should see the M-4 Motorway, Follow it west until you get to Swindon and bam. You're in Wiltshire. (Chippenham, Malmesbury, Warminster, Salisbury, Amesbury and Marlborough all form a loose perimeter of the counties boundaries.

Gloucestershire: find Bristol on your old Google Map, zoom in a bit until you see the M-5 motorway and follow it north to (strangely enough) the city of Gloucester. Bam. You're in Gloucestershire. (Alternatively, you can also just input 'Wiltshire' and 'Gloucestershire' into Google Maps and figure out the same thing- but it's just not as much fun. Also, I've been to Gloucestershire. The Cotswolds are beautiful.)

First up, the flag of Wiltshire: 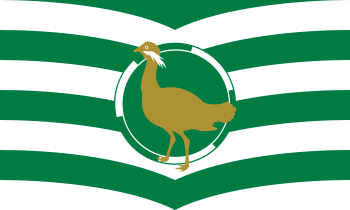 First placed into usage in 2007, before being officially adopted in 2009, the flag of Wiltshire is a striking one- with alternating stripes of green and white symbolizing the grassy downs of the county and their chalk underlay. The colors stand for hope, joy and safety (green) or peace (white.) It's known as the Bustard Flag because of the bird on the center of the flag. It's been extinct in England since 1832, but there's currently efforts underway to reintroduce it and there's a small population going down near Salisbury. The bird is gold on a solid green circle to represent the open grassland of the county, the six green and white sections represent the stone circles at Stonehenge and Avebury in the county as well as the six counties that surround it. (Somerset, Dorset, Gloucestershire, Oxfordshire, Berkshire and Hampshire.)

Next up, the flag of Gloucestershire: 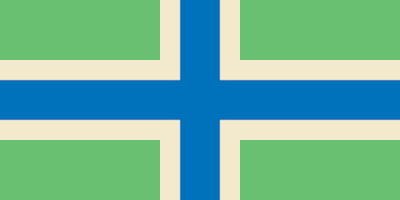 Known as the Severn Cross, this flag was adopted in 2008 as the winning entry in a competition held by the High Sheriff of Gloucestershire to celebrate the 1000th anniversary of the county. There's really not a lot of this this flag, except that I'm honestly not sure about the color scheme. It seems almost faded somehow and I'm not especially sold on the combination of the colors either. It's more... 'eh, another cross?' But I'll give them some credit. The symbolism of the flag is nice and easy as well: the blue of the cross stands for the River Severn, green stands for the Golden Valley and the cream in the flag stands for the stone of the Cotswolds.

So there you have it, the flags of Gloucestershire and Wiltshire! Remember, until next time keep your flags flying FREAK or otherwise!