This Week in Vexillology #241

December 16, 2017
We're wrapping up 2017 with two more flags featuring the letter 'B', this time a duo from Africa: Benin and Burkina Faso. (I'll be off for a couple of weeks for the holidays ostensibly to do my annual year end review as I scratch my head and puzzle at how to take this modest little blogging venture of mine to the next level, whatever that is- though this year, I'm really combining holidays with a scoop of paternity leave as the arrival of Baby #3 is imminent!) Our two flags this week are actually pretty cool in their own way and while they dip into the traditional color scheme/design pattern seen across West Africa quite a bit, they're striking in their own way. 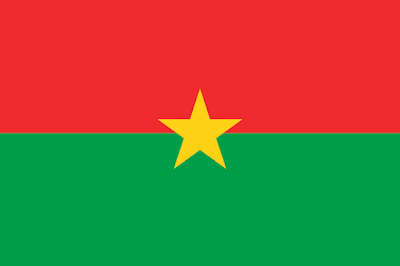 Okay, mild tangent time: I have an incredible twitch when it comes to globes in antique stores and Burkina Faso is one of the countries that I use to figure out just how old the globe is, since there was a bit of a coup d'etat there that changed the name of the country from Upper Volta to Burkina Faso- along with the name change, the flag changed as well. (The old flag of Upper Volta was a horizontal tricolor of black, white and red standing for the three tributaries of the Volta River, the Black Volta, the White Volta and the Red Volta.) The current flag was adopted on August 4th, 1984 as the national flag.

According to the flag's wiki-page, the pan-African colors are said to symbolize a break with the colonial past and the unity with the other African ex-colonies. The red also stands for revolution and the green is for the abundance of agricultural and natural riches. The star placed over the stripes stands for the guiding light of the revolution. 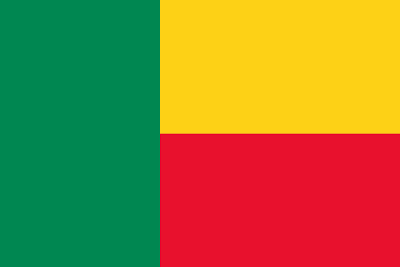 Benin had a bit of a Socialist period between 1975-1990 where they had a pretty vanilla flag which was green with a red star in the upper left corner and that was it. Their current flag was the original post-independence flag that replaced the French Tricolor and they happily brought it back after the Socialist Government fell in 1990. The colors are (once more) pan-African in nature and honor Ethiopia as the oldest independent country in Africa. The yellow and green stand for the northern savannas and palm groves in the south and the red stand for the blood shed by those who fought for the independence for the country from France.

There's really not a whole lot more to the flag of a Benin than that, I'm afraid.

Remember until next time, (which will be in 2018), keep your flags flying- FREAK or otherwise!