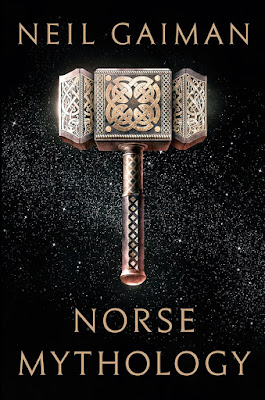 This book was another birthday purchase and is the perfect intersection between my appreciation of the writing of Neil Gaiman and my long time love of all things mythology related. While most of my mythology obsession was when I was much younger and centered around Greek mythology*, I've always been curious about Norse mythology but never seemed to be able to find a really good one volume book on Norse mythology- until now that is. (I do have the actual Prose Edda kicking around my Kindle somewhere, but I haven't gotten back to it yet.)

Gaiman happily stepped in and produced an eminently readable volume of Norse mythology that breathes new life into the tales from both the Poetic and Prose Edda while managing to put them into a contemporary voice that can appeal to as many readers today as possible. Gaiman starts the book with an introduction to all the major Gods (Aesir) in the pantheon, ranging from the familiar like Odin, Loki and Thor to names like Balder and Freya and Frigg as well. He opens with the creation of the world and then delves into stories like Odin and the Well of Mimir, which sees Odin sacrifice his eye to gain wisdom.

The stories flow nicely yet manage to stand just fine by themselves, which allows the unfamiliar to meet newer characters of Norse mythology. Freya especially stands out in multiple stories, but my favorite is probably 'The Master Builder', where Loki, in an attempt to get the gods a shiny new wall for Asgard, unwisely offers the builder Freya's hand in marriage if he completes the task on time. Freya needless to say is not pleased and pretty much openly tells Loki that if he wants to live, that the builder had best miss his deadline- which is the entirely correct response as well as a moment that endears her character to the reader.

Another standout: 'The Mead of the Poets', which tells the tale of where poetry comes from and how Odin, through various machinations stole the mead that gives the gift of poetry, which closes with this beautiful paragraph, explaining where the bad poetry came from:


No one, then or now, wanted to drink the mead that came out of Odin's ass. But whenever you hear bad poets declaiming their bad poetry, filled with foolish similies and ugly rhymes, you know which of the meads they have tasted.

This both made me laugh and is a perfectly reasonable explanation for where the bad poetry comes from in my humble opinion. Eventually, of course, Gaiman gets to the end of all things and tells the tale of Ragnarok and the final battle of the gods, where they all meet their fates only to see the world born anew and the game begin again.

Like so many people out there, a lot of my limited knowledge of Norse mythology comes from the Marvel universe- which is kind of sad when you think about it, but the characters in my head all come from there and by and large they all hold up pretty well in this book. Odin seems just like Anthony Hopkins in my head and Loki seems just like Tom Hiddleston. Gaiman writes Thor as more of a meathead than Chris Hemsworth portrays him in the movies, but he has a flash or two where it sort of all matches up in my head. (I honestly don't know whether this is a fair comparison or not. I feel like in my head it is, from a literary point of view, it's probably dubious- though Walter Simonson's run on The Mighty Thor is well worth reading and draws on this mythology far more than the movies do.)

Overall: It's Neil Gaiman- have yet to read a bad book by him and this is no exception It's slim, compulsively readable- I read it very quickly indeed and if you've ever been curious about Norse mythology and don't want to jump all the way into something like the Prose Edda, this is an excellent place to start. **** out of ****

*I loved The Illiad and The Odyssey when I was growing up. Troy was a terrible movie. Disney's Hercules is just god-awful and butchered the mythology in ways that still enrage me. (Hades was NEVER a bad guy, damn it.) Kevin Sorbo's Hercules: The Legendary Journey's has probably done the best job adaption mythology the right way. Though there is that moment in Armand Asante's version of The Odyssey where he shoots the arrow through the axe heads that is just about damn perfect.