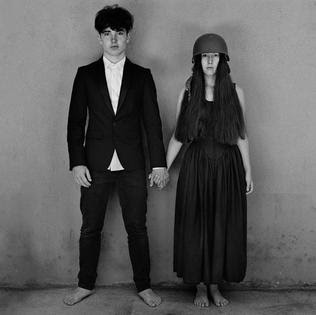 At the outset, I should admit that I've only listened to parts of Songs of Innocence and since this album is intended to be a companion piece to that album, I'm probably going to have to back track to listen to that one as well, just to get the full effect. (Songs of Innocence, of course, was the infamous album that just sort of showed up in your iTunes a few years back- for free, mind you- but regardless of whether you wanted it or not.) But any new U2 album is going to pique my interest, so I found this one on the old Spotify and gave it a listen.

Songs of Experience is enjoyable enough and shows flashes of interesting moments, but didn't really do much for me overall. I feel like it sort of balanced between trying to recapture the sort of sound that the band went for in All That You Can't Leave Behind and pushing into something new and different. I remember listening to All That You Can't Leave Behind and thinking, 'man, I don't know where U2 have been, but now they're back.' This album makes me sort of excited in parts and sort of bored me in parts and that's not really a mixture I dig coming from this band.

There is a consistent bright spot though and I think that's The Edge. His guitar work on this album is excellent and produces hooks that growl and get at you and make you wonder why there's not of The Edge cutting loose and doing his thing. (One of the highlights of The Joshua Tree concert this year was their performance of 'Bullet The Blue Sky'- dude ate his Wheaties and then some.) It's not all bad though: 'The Blackout' hearks back to the growly days of tracks like 'Discotheque.' And the early tracks of the album were interesting enough to keep me listening, none of them really stood out until 'American Soul' (which my sketchy notes describes as 'good, but lots of talk about love- which is something that could be said of the album as a whole. Don't get me wrong: at this point, Bono gonna Bono, no matter what you say, but it would be nice to hear U2 explore ideas of love that don't relate to a global, humanity level type of love again.)

Overall: I think I've got to tackle Songs of Innocence to see if it somehow compliments this album or enhances my enjoyment of it. I might even go back and reassess it a bit after I do that as well. But this was sort of a forgettable album for me- with a few exceptions here and there, but I found myself longing to go back and listen to U2 albums of yore, since so much of this album felt like songs I had heard before. My Grade: ** out of ****