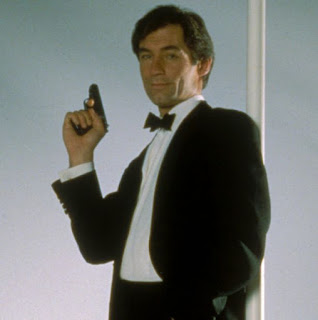 James Bonding has made it's way back into my podcast rotation and they've tackled both the Timothy Dalton Bond movies in recent episodes and thanks to Amazon Prime getting every non-Daniel Craig Bond movie, I decided to give both of them awhirl and watch them again. I've always felt that Dalton got kind of a bad rap as Bond. The Living Daylights is probably one of my all-time favorite Bond movies and License To Kill...  not so much. (My main beef with License To Kill was Felix not dying, which made Bond's revenge tour seem somewhat pointless to me, but on a revisit, I've actually changed my mind.)

I started with Dalton's debut, The Living Daylights. 007 is assigned to aid in the defection of a high level KGB General, but disobeys his orders to shoot the sniper allegedly sent to kill General Koskov when he notices that she is a cellist in the orchestra. Shooting the rifle from her hands, he instead uses the Trans-Siberian Pipeline to smuggle the General over the border into Austria and then to Britain. Being debriefed, Koskov tells MI-6 that the new head of the KGB, General Pushkin has brought back the old policy of 'Smiert Spionam' or 'Death to spies'- but before Koskov can tell them more, he's kidnapped and allegedly taken back to Moscow. Bond is assigned to track Pushkin to Tangier and kill him in retaliation for the deaths of various agents.

Bond has a different notion, however and before heading to Tangier he flies to Bratislava to track down the cellist, Kara Milovy. She confirms that Koskov's defection was staged and reveals that she is actually his girlfriend. Bond convinces her to go with him to Vienna, ostensibly to be reunited with Koskov. In Vienna, another MI-6 agent is killed by Koskov's henchman and the duo leave for Tangier. In Tangier, Bond confronts Pushkin, who claims to have no knowledge of the assassination program and reveals that he canceled an arms deal between Koskov and the American arms dealer Whitaker because he was about to arrest Koskov for corruption.

Kara on the other hand, has developed some suspicions about Bond and promptly sells him out to Koskov who places them both on a plane to Afghanistan. Once in Afghanistan, Kara figures out that her would-be boyfriend is kind of a jerk, she and Bond escape to the Mujaheddin where they figure out that Koskov is going to buy a bunch of opium from them and use the profits to keep buying the Soviets weapons to continue the conflict. Everyone escapes Afghanistan and goes back to Tangier where Koskov and his associates are arrested and then Kara, now living in London gives a concert for everyone.

Dalton's next (and last) Bond movie, License To Kill is actually more of an outlier than I remember ti being. It's largely set in the Caribbean, which stands in stark contrast to it's predecessor, which saw Bond going to Bratislava, Vienna, Tangier and Afghanistan. It opens with DEA agents stopping James Bond and his friend Felix Leiter on the way to Felix's wedding. Drug kingpin Franz Sanchez is nearby and they have a shot at bringing him in, which they do. Then they parachute down to Felix's wedding. Sanchez, of course, bribes a DEA Agent to get out of prison and his crew kidnap Felix and his new bride, maiming him and killing (and it's heavily implied, raping) her.

Bond is ready to hunt down Sanchez to bring him to justice, but M appears in Key West, giving him an assignment in Istanbul and ordering him to leave the hunt for Sanchez to the Americans. When Bond refuses, M revokes his license to kill and Bond goes on the run, becoming a rogue agent and starting an infiltration of Sanchez's organization with some clandestine assistance from Q and teaming up with Pam Bouvier, an ex-CIA agent along the way.

Bond is close to assassinating Sanchez, but is foiled in his initial attempt by Hong Kong Narcotics Bureau Agents (apropos of pretty much nothing) and is captured by them and about to be turned over to MI6 when Sanchez raids the house and rescues him and after framing one of Sanchez's henchmen, Bond soon finds himself in the Inner Circle of the drug kingpin.

Sanchez takes Bond to his base, where Bond learns that Sanchez's drugs are dissolved in oil and then disguised as fuel to ship it safely to Asian market, but Bond is finally recognized. He sets fire to the lab, wrecks Sanchez's base and chases him down in a plane before finally getting his revenge by using the lighter that Felix and his wife gave him as a wedding gift to light Sanchez on fire.

Overall: both these movies are underrated in the franchise as a whole and Dalton I think gets kind of a bad rap as Bond, because he's actually pretty damn good in the role. The Living Daylights is one of the few Bond movies that I think holds up as just a good movie and not just a good action movie. Along with Octopussy it probably fits more comfortably into the role of 'Cold War thriller/action' than any other films in the franchise. However, it does suffer somewhat from the multiple endings and codas and it just never seems to end...  it's like The Return of The King of Bond movies because it never seems to end, but that's the only flaw in an altogether kick-ass debut for Dalton.

I like that he follows it up with License To Kill though. It really is an outlier in the franchise in so many ways and it's shockingly violent. I remember Felix getting his legs eaten off by sharks, but I don't remember Della's death being so violent and watching it again, Bond's thirst for revenge and his ultimate revenge on Sanchez seems very believable indeed. I feel like after Roger Moore's tenure, Dalton's approach to the character was more of a return to the Sean Connery era with a sterner more violent and gritty approach to the character and overall it works well for him. It's almost worth wondering what his third Bond movie would have been like- but I also think Goldeneye is one of the best Bonds ever made, so I'm fine with Dalton being 'two and done' in the role. Both his movies still stand up well and remain worth visiting again. My Grade: The Living Daylights *** and 1/2 out of ****, License To Kill *** out of ****