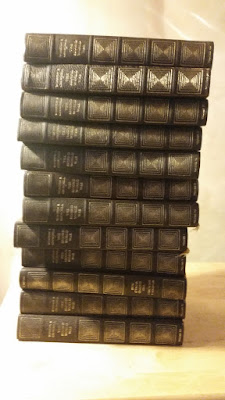 According to Goodreads, I started reading this on February 4th, 2012. I finished it on December 8th, 2017. That's almost six years to get through all twelves volumes of this series and it feels as if an incredible weight has been lifted off of my shoulders.

You can say a lot about Churchill and goodness knows people have, but the man could write. I'll be honest though: I have an abridged one volume version of his A History of The English Speaking Peoples knocking around somewhere and I vastly prefer that one volume to this twelve volume monstrosity. Partially, I think it's because when properly constrained, Churchill can write history that is both compelling and informative. When left to his own devices, however, he can, well, carry on and on and on and on- and that, combined with Churchill's own admission that the twelve volumes about The Second World War are about giving his own version of what happened to ensure the old phrase, 'history is written by the victors' is more or less the case. The fact that Churchill includes just about every piece of correspondence, report and telegram he ever wrote during the course of the war just makes an already length story even longer, if that's possible.

Not that it's all bad. Churchill is nothing if a completist and gives a thorough accounting of the Second World War and front a different perspective as well. I've always thought American accounts of the war- certainly what I was taught in high school, were somewhat truncated. The Second World War didn't begun until 1941, it seemed and the first years of the war were glossed over with ease. Not so here and if you've got the itch to really go deep on the topic, these volumes do provide an incredibly complete picture of just what a global conflict this was.

I think that's what I liked most about these books. I got to learn all about Tobruk and the British campaign in North Africa against the Italians. There was also far more fighting in southeast Asia than I was aware of, especially the British campaigns against the Japanese in northeast India and into Burma. The Battle for the Atlantic and the incredible problem of U-Boats is dealt with in thrilling and complete detail as well. (I had no idea just how much of a threat the U-Boats posed- at their height, they really did pose a mortal threat to the British war effort.)

The build-up to D-Day and the problem of integrating the Free French back into newly liberated France (and just dealing with DeGaulle in general) is a fascinating topic that's discussed at length as well as exhaustive accounts of the Quebec, Tehran, Yalta and Potsdam Conferences and how the grand plans for a post-war settlement sort of unravel a bit as the Allies start to bicker over the details. By the final volumes of the series, you get a sense of how Churchill was starting to feel that British interests were being marginalized by the US and USSR, especially over the matter of Poland. Poland was the impetus for the British going to war in the first place it's very obvious that Churchill feels that Poland gets a raw deal.

Churchill's grand plan to invade from the Adriatic with an eye to cutting off Soviet advances in Eastern Europe seems oddly prophetic, but by that point in the war, there were just too many moving parts in the Allied Command Structure and it seems that Churchill was listened to politely and then they went back to the original plan of a landing in Normandy. He also gets a little upset when the Soviets start advancing into places that they weren't technically supposed to go and you can sense some of his frustration as the Soviets and the Americans sort of set up the post-war world by gently marginalizing the European powers.

Overall: if you're looking to tackle a great and grand historical challenge, you could do far worse than making your way through these twelve volumes. Churchill's voice as a primary source for the events that unfolded throughout the war is a valuable and informative one, so if you're just a casual history buff, it's interesting stuff. If you're a serious World War II buff, then these 12 volumes probably should bump up to 'must read' for you. (I'd also recommend The Liberation Trilogy by Rick Atkinson, if you're looking for a more America-centric World War II series- I read the first volume, but it was excellent enough that I feel confident about the next two.) Just for the sheer volume of history that's jammed into these books and because this series really does fall under the category of 'Everything You Ever Wanted To Know About The Second World War But Were Afraid To Ask' I'm going to have to say, ***** out of *****