Time To Take Our History Back 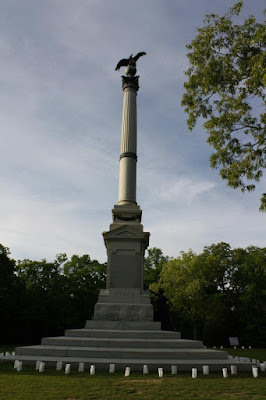 I've never lived in the South- but I've been to the South and while up here in Iowa and I'm sure a lot of northern states, the Civil War seems like a subject confined to history books, in the South, it's not. It's alive down there and it can sneak up on you in unexpected ways.

The first time I ever saw the Stars and Bars- the actual Confederate flag and not this dishrag- was in downtown San Antonio of all places, flying over a super old looking hotel. I had to do a double take at first...  was that? It was. Holy shit. It actually was. I didn't get it. I didn't understand it- especially in Texas, which seems to have a separate subtext entirely, namely: 'we were our own country once- piss us off, we could easily be so again.'

Then there was one of our trips to Atlanta. We met up with some friends of the Parentals. The Dad was a tropical disease specialist so they were doing a stint down at Emory and working with the CDC. We ate Cuban food at this nice little place somewhere in suburban Atlanta and then kind of walked around the district, which seemed pleasant, vaguely hip, fun and then we turned a corner and ran smack dab into a Confederate memorial of some kind. I couldn't tell you what it was.

That was also the trip we went to Stone Mountain. Don't even get me started on Stone Mountain... I have no idea why that thing hasn't been chiseled away decades ago. It's like a weird, Confederate Mount Rushmore and it's...  uncomfortable. (Even more so when you find out that the Klan launched it's revival at Stone Mountain back in the day.) The whole experience didn't compute in my brain... it was like a gigantic Confederate Mount Rushmore. All the flags of the Confederate States, complete with dates of secession and dates they were re-admitted to the union. It's like stepping into an alternate version of history where what actually happened didn't happen at all. (Once you're done with the weird fantasy land at the bottom of the mountain you can walk up the thing itself and see Atlanta in the distance. Then the thought occurs to you that Sherman would have burned his way through most of the horizon in his march to the sea. And you still wonder why any of it is still here.)

History, they say is written by the victors. Except in America's case, it wasn't somehow. It almost was, but then Reconstruction ended and somehow all the important stuff- like the war being about the right to keep slaves and oh, the fact that the Confederacy lost got swept under the rug. It wasn't about the slavery. It was about 'state's rights' and other things that were distinctly not slavery. And gradually, over the decades, our history was rewritten by the losers.

Every street name, every elementary school, every statue should be taken down. You know that scene in Indiana Jones and The Last Crusade when he's fighting on the ship about the Cross of Coronado and he yells, "It belongs in a museum!" So do every last one of those monuments.

That simple sentence should have been the principled position of every American, left or right, Democrat or Republican for years, if not decades now. The fact that it hasn't been says a lot about the state of our political discourse today. Where was everyone on these monuments five years ago? Ten, even? I see a lot of people announcing that 'it's time to pick a side' after what happened last weekend in Virginia. Now it's time to pick a side. Now? Shouldn't it be pretty obvious what side to be on, a century and a half after the Civil War ended?

We won. It's time to stop letting the losers write our history.

I originally wanted to write this post because Iowa kept getting named checked in articles about the number of Confederate memorials that exist in the country. There is a Civil War monument down in rural Davis County. It remembers the Bloomfield Raid, when Confederate forces, dressed in Union uniforms crossed the border. It was the furthest north Confederate forces of any kind ever got. Doesn't seem to be on the same level as a statue of Robert E. Lee, Jefferson Davis or god forbid, Nathan Bedford Forrest. Monuments and markers like that. A marker to state, clearly and simply: this was the farthest north they ever got. I'm okay with that.

Weirdly enough, in the years after the Civil War when the first monuments and markers started to go up, it was the north that accounted for the majority of them. When we went to Shiloh, the battlefield park was full of them. I wanted to go somewhere for the 150th Anniversary of the Civil War because I thought it would be both cool and important to see some history. I had to do some research though, because my initial instinct was to go to Gettysburg, but I figured everyone would want to do that. Turns out that no Iowans fought at Gettysburg, but plenty of them fought and laid down their lives for the Union at Shiloh. They held the Hornet's Nest and saw fierce fighting along The Sunken Road. The picture above is the Iowa Memorial you will find there. At it's base, the inscription reads: 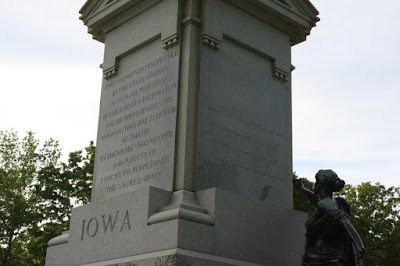 "This monument is erected by the state of Iowa in commemoration of the loyalty, patriotism and bravery of her sons who on this battlefield of Shiloh on the 6th and 7th days of April ADMCCLXII fought to perpetuate the sacred union."

This is the history that should be remembered.