Cloudy, But An Eclipse Nonetheless 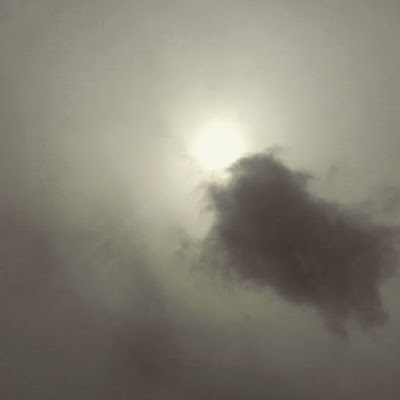 I took Sunday and Monday off sometime in January. I had a crazy notion to throw the kids in the car, drive to Omaha, crash with the in-laws for a night (on Sunday) and then Monday, drive a little further and put ourselves smack dab into the path of totality for the eclipse.

It didn't work out that way, of course. The Missus couldn't get the day off (the first day of school is Wednesday, and since the Elder Spawn is starting Kindergarten that's considerably more important than a mad drive halfway into Nebraska for a solar eclipse.) And then the fact began to loom in my head that it would be a lot of driving with a 5 year old and an almost 2 year- by myself. Then stories about traffic began to leak... it was going to be a gridlock! And did I really want to drive all that way for 2 minutes of totality the kids might, maybe, go 'oh cool' at and then want to go home?

I decided no. We were set to see 92% of the eclipse. I could get the Younger Spawn down for a nap, that way I wouldn't have to worry about him tearing off his eclipse glasses and burning holes in his eyeballs. It seemed like a good solid plan... except when we woke up on Monday morning, it was raining.

The rain stopped soon enough and by 10 am we were getting tantalizing little peaks at shards of blue sky. But by eleven thirty, it seemed like we were destined to be clouded out. So we had lunch, I got Younger Spawn down for a nap and the Elder Spawn and I headed outside for our usual game of pick-up soccer. (Spoiler Alert: I'm bad at soccer and he's legit good...)

Even better? The clouds cooperated enough to let the sunshine in for awhile. I didn't have any special camera equipment- so actual photos of the eclipse were next to impossible to get- but we had our glasses and could get a really good look at it until the clouds moved back in again and made it harder to see. We played soccer and then wrapped up just in time for the peak of the eclipse. Then, the brightness of the sun thinned the clouds out a little more and we got really, really good looks at the peak. It was the first time since 1994 or so (I was in 5th grade) that I had seen a solar eclipse of any kind and although we weren't in the path of totality, 92% is a hell of a lot better than looking through the hole punches of my lunch ticket at the sidewalk at the back of my elementary school.

The best part? It's on 7 years until the next one and 28 years until the one after that. I've got my eyes on Carbondale, Illinois for 2024. The kids all be older and it's on a Monday, so we can make a long weekend of it. And if that one doesn't pan out for whatever reason, then 2045 it is! One of these times I'm going to get us smack dab into the path of totality. #LifeGoals.