This Week In Vexillology #225

August 19, 2017
I'm dipping back into the archives this week for another 'Lost Week In Vexillology' this time featuring the last flag of Central America on my list- last, but very much not least, we've got the flag of Belize. 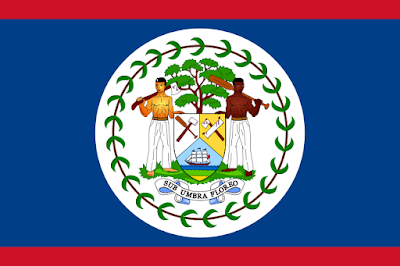 A relatively new flag, as flags go, the flag of Belize was adopted on September 21st, 1981 which was the country's very first independence day. From 1870 all the way up through 1981, the country was a British colony known as British Honduras.  It features the Coat of Arms at the center and the colors blue and red.

We'll get to the Coat of Arms in a second, but let's deal with the colors first. Belize (like the Seychelles and Panama and a few other countries out there I can't remember) struck a political compromise with their two main political parties at independence. The People's United Party (PUP) had colors of blue and white- which were originally proposed for the flag, but surprise surprise, the United Democratic Party wasn't about that had the colors of red and white. So, how do you get to a compromise? You add some red stripes at the bottom and the top and then you have combinations of both red and white and blue and white in the flag. Everybody's happy.

Let's break down the Coat of Arms. The fifty leaves that circle it represent the year 1950, which is when the PUP first came to power. Within the circle, you find a mahogany tree that stands behind the shield. On the shield you've got the tools of a wood cutter in the upper sections and a ship in the lower one- this is to symbolize the importance of the mahogany tree to the economy of Belize back in the 18th and 19th Century. The shield is supported by a Mestizo and an African who have an axe (to cut down the mahogany trees) and an oar (to represent ship building). Belize is one of the few countries in the world to feature people as a major design element of their flag. The motto underneath it all: 'Sub Umbra Floreo' or, 'Under the shade I flourish.'

And that's the flag of Belize!  Remember, until next time- keep your flags flying, FREAK or otherwise!