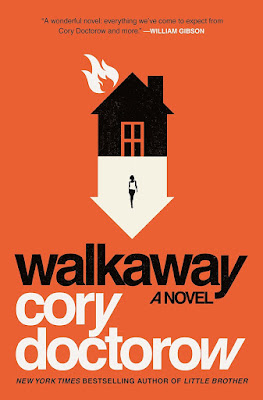 This was an incredible, thought-provoking book that's an actual science fiction utopia as a posed to a dystopia and more importantly described a future which is both believable and plausible to imagine. Science fiction always works best for me when it deals in ideas and Cory Doctorow is putting himself right up besides Neal Stephenson and Kim Stanley Robinson as a writer of ideas worth reading and thinking about.

Walkaway imagines a future where, thanks to 3D printing, technology exists that can provide anyone with just about any material need they can imagine- including food. Given that, it's not surprising that an increasing number of people are choosing to reject the society of jobs and money and just walk away from it all. After Hubert and Seth meet Natalie, the zillionaire's daughter at a 'communist party', a techno-rave up in an abandoned factory where the young and hip print their drugs and toys and dance the night away, they get the idea to walk away themselves after their party is raided by the police and their night goes terrible awry. Natalie wants to be done with her father. Hubert and Seth don't have much going on anyway, so...  they walk away.

They soon find the B & B, a walkaway lodge and meet Limpopo, who helps them adjust to the new rules of the walk away lifestyle- they have some initial bumps along the way but soon enough, they settle in. Natalie changes her name (and becomes Iceweasel) Hubert and Seth find love and meaning in their new world and settle down.

The book then skips ahead a little bit and picks up with Iceweasel finding a campus of the Walkaway University which has been destroyed by forces unknown- the survivors had been expecting an attack of some kind and fled underground to a series of bunkers. She quickly discovers why they've been attacked- it turns out that these particular walkaway have figured out how to successfully scan brains and upload them to a simulated existence online. In other words: they've beaten death and the world of the ultra-rich knows it and they want the knowledge for themselves. The war to control the direction of the world itself is suddenly on- and Iceweasel finds herself back in the clutches of her rich father. Her friends work to free her even as the forces of the 'default' world get closer and closer and eventually Iceweasel walks away again, though her freedom comes at a price.

Another skip- this time fourteen years in the future and the world is heading even more in the direction of the walk aways. The default world of the super rich is becoming more and more isolated and when Iceweasel and her wife, Gretyl find out that a friend they long thought dead (they've got her sim running their house) is actually alive, they head back to where it all began for one final confrontation with the forces of the 'default' world and once that's done- the world will be forever changed.

One final epilogue and another jump forward and Iceweasel is waking up after years of slumber- she 'deadheaded' herself because of a cancer attacking her liver. Turns out in the intervening years, they've not only figured out how to grow new bodies, but they've mastered downloading mind scans back into bodies as well. The walk aways have finally won, they've beaten default, they've beaten death and the future looks very bright indeed.

This was a fascinating book to read with real implications for the coming decades ahead of us. Technology is on the cusp of bringing major changes to the world we know today- the foundations of what we consider society today may not survive automation and a world where jobs are scarce because technology allows you to print and make whatever you may need yourself- and if that happens, then why bother even having a job? While I'm not sold on the idea of beating death just yet- the technology behind brain scanning is advancing quickly, so the ability to upload yourself could become a reality. What that means for humanity- are you really yourself if you've uploaded a copy of your brain scan into a machine- is something that Doctorow explores in great and fascinating detail.

Overall: This is a fascinating look at a science fiction utopia that's both believable and plausible. The ideas that they explore here, we're going to have to tackle in the future whether we want too or not. Thought-provoking, entertaining as hell and an important work of science fiction that I think will stand along side such classics as Snow Crash and Neuromancer soon than you would think. **** out of ****