This Week In Vexillology #226

August 26, 2017
We're dipping back into the 'Lost Archives' for once again this week, this time zipping over to South Asia and one of my favorite flags, the flag of Sri Lanka: 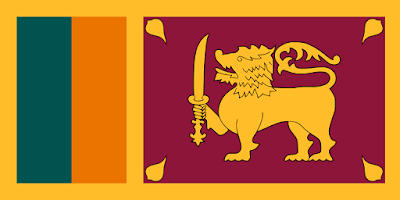 Adopted on May 22nd, 1972 as the civil and state flag, it's known as- surprise, surprise- the Lion Flag, because, well, there's a big ass lion with a big-ass sword on it. The Lion and the sword stands for the bravery of the Sinhalese. The four Bo leaves in the corners that surround the lion stand for he four main concepts of Buddhism (Metta, Karuna, Mudita and Upekkha). The two stripes stand for the main minority groups- the saffron stripe stands for the Tamils, the green one for the Muslims. The maroon background stands for the majority Sinhalese. The gold border stands for the unity of Sri Lankans.

There's a lot of irony to be found in this flag, given what I know about the history of Sri Lanka. Honestly, the flag is sort of the ideal that should be striving for in many ways- given the fact that they're not even a decade clear of a very very long and bloody Civil War- a Sri Lanka that recognizes all it's ethnic group and protects their rights and traditions would be a good thing indeed.

However, a glance at history reveals that the symbolism has been around for a very long time indeed- the Lion symbol has been on flags in Sri Lanka going back all the way to the reign of Vijaya, who arrived on the island in 486 BC. The Lion Banner lasted until 1815 when the Kandyan Kingdom came to an end when King George III was proclaimed King of Ceylon.

(FYI: if you want to take a deep dive on the symbolism of this flag, check out the wiki-page of this flag and you too, can find out what the nose of the lion and the eight hairs on it's tail mean.)