This Week In Vexillology #191: Guam

November 19, 2016
The Brown Flag Challenge rolls right along this week with the flag of Guam: 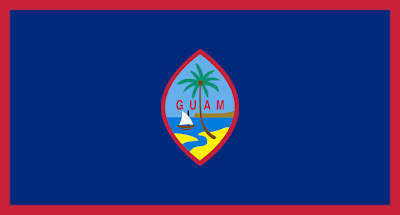 I'm going to go out on a limb here and assume that every one has heard of Guam and knows that it's an American Territory in the specific, but let's get more specific than that: just where the hell is Guam out there in the big wide blue ocean of the Pacific?  Well, it's here: 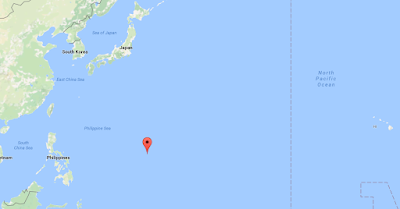 (My apologies for this map being a little small. I tried to set it as extra-large and it was too damn big, but I assume this is good enough for everyone to tell where Japan, Korea, China and the rest of Asia are in comparison to where Guam is. That little white smudge on the right side of the image? That's Hawaii.)

So what's up with Guam? Discovered by Magellan in 1521 but it wasn't officially claimed by Spain until 1565 and served as an important stopping point for the Spanish fleet on the route between Acapulco and Manila. After the defeat of Napoleon, many of Spain's colonies in the New World became independent, shifting Guam's allegiance from Mexico to the Philippines before being given to the United States after the Spanish-American War. They were invaded and occupied by the Japanese in World War II and 18,000 Japanese soldiers died trying to keep it. (Though props to this guy. He held out until January of 1972.)

They're US Citizens, but they can't vote in Presidential elections and have a non-voting delegate to Congress. (They do have delegates for the party primaries though, so that's something I guess?) But other than that, they've got a Governor, Lt. Governor and all the trimmings you'd expect to find in a regular old state!

Their flag was adopted on February 9th, 1948 and is a striking shade of dark blue with a red border. Their Coat of Arms is in the center- and here's the cool part- it's not your typical Coat of Arms. It's shaped like an almond! The boat depicted in the water is a proa, sailing in Agana Bay near the capital. The land form at the very back are the Punta Dos Amantes cliffs- which, along with the palm tree gives us the brown in the flag- and the shape, while almond, is actually meant to recall the shape of the slingshot stones used by the islanders' ancestors.

(Complementing the flag, the municipal flags for each of Guam's 19 villages/municipalities were also designed to represent as aspect of the culture of Guam- I didn't actually look any of them up, but I really like the idea of that. A sort of unified design plan.)

I'll be off next week for Thanksgiving and to hopefully give myself a chance to heave my book out in into the world, but remember, until next time, keep your flag flying- FREAK or otherwise!