'Star Trek Beyond' --A Review 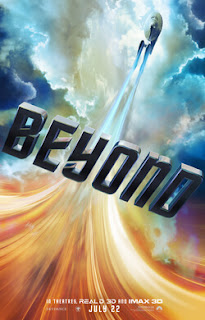 I'm not a Trek Purist by any stretch of the imagination- I loved the first Star Trek reboot/AbramsTrek/Kelvin Timeline movie- I loved how they tied the new timeline in with the old and the destruction of Vulcan was a brilliant move that demonstrated that while they wanted to honor the series, they weren't going to let themselves be bogged down in the decades of canon that came before them. And the sense of scale was perfect! For the first time, the Enterprise felt like a starship- a really big one and everything look amazing and really really cool.

I had a lot of hope and a lot of optimism after the first movie. It felt fresh, exciting, even new- just the injection a lagging franchise needed, right? Then came Star Trek Into Darkness...  ugh. Talking about pissing away your advantages. You can't divorce yourself from decades of canon only to cook up a contemporary half-baked remake of Star Trek 2: The Wrath of Khan which is universally acclaimed to be one of the best Star Trek movies ever made.

Happily, Star Trek Beyond rights the ship and then some.

The movie opens with the ship and crew three years into their five year mission and the Enterprise is arriving at Starbase Yorktown for rest, relaxation and resupply. Kirk (Chris Pine) is trying to find some meaning in the continued exploration of deep space. Spock (Zachary Quinto) and Uhura (Zoe Saldana) end their relationship. Ambassador Spock (Leonard Nimoy) dies. Scotty (Simon Pegg) keeps things running and Sulu (John Cho) reunites with his husband and family. Kirk, it turns out has applied for position of Vice Admiral, trying to break out of his rut (or whatever he's in) but before he can proceed further, he and the Enterprise get dispatched on a rescue mission.

An escape pod emerges from a nearby uncharted nebula and the survivor asks for help- but it turns out that the rescue mission is actually an ambush and the Enterprise is swarmed and destroyed, the crew forced to abandon ship on the planet below. Kirk, Chekov, Spock and Bones and Scotty remain free, but Uhura, Sulu and the rest of the crew are captured by Krall (Idris Elba), who attacked the Enterprise. Uhura and Sulu soon figure out the plan. Krall is after an ancient weapon called the Abronath, which the Enterprise has (but figured was an ancient doodad of some kind)- once he has it, he's planning on attacking Yorktown, destroying all life onboard and then using it's advanced technology to attack the Federation.

Kirk and Company soon figure this out as well- thanks to Scotty finding an ally in Jaylah (Sofia Boutella), a captive who escaped from Krall and is using what turns out to be a long lost Federation ship as a home. Soon enough Kirk and Company launch a plan to free the crew and escape using the ship so they can go and stop Krall- who has figured out how to use the bio-weapon and is heading toward Yorktown to attack and wipe out the inhabitants. Kirk and Company destroy Krall's swarm of ships and chase Krall down into Yorktown- finding out the truth behind his identity and stopping him from activating the bio-weapon just in time.

After the dust settles, Kirk decides he doesn't want to be an Admiral anymore, Spock and Uhura get back together, everyone has a birthday party for the Captain and they watch as the Enterprise-A is constructed before heading out on their next mission.

Okay! The Trek Train is back on the tracks and I am back on board. This movie was fun. Everyone had their moments in the sun, the actors look like they're having fun- there are some especially poignant moments with the loss of Leonard Nimoy (explained in the movie with the Death of Ambassador Spock) and the scenes with Chekov (Anton Yelchin, who died a month before the movie came out.) Everything works- I feel like it teeters a bit on the edge of being almost cartoonish and too colorful at times, but it doesn't fall over that particular cliff, which is admirable. The sense of scale and wonder and the vastness of space (and the ships/starbases) remains something that the AbramsTrek Universe absolutely nails on the head. (The warp effects are actually pretty cool in this one too...  don't think they had those in the last movie.)

If I have a quibble with this movie, it's a tiny one. Star Trek sets the universe up. Star Trek Into Darkness is a remake of Wrath of Khan, Star Trek Beyond sees the first Enterprise destroyed and they've already revealed that the next movie is going to involve time travel. (Please, no whales.) I'm assuming then the 5th one will be about meeting God and the 6th one will be about Kirk retiring already? Wait, what?

Look, I get it- you want to draw some parallels with the original movies. Fine. Great. But why do you need too? This proves that you can write an original, fun, Star Trek movie without all those hang-ups.

Overall: Would not buy Star Trek Into Darkness. Star Trek Beyond on the other hand, will be on my Christmas Amazon Wishlist. I'm excited to see where they go next with the franchise. *** out of ****.