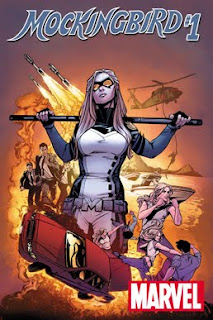 I've been an avid listener of 'Jay and Miles X-Plain The X-Men' for awhile now, so when, about a month or so ago, I saw them Tweet something with the hashtag #StandWithChelseaCain attached to it, I got curious. I clicked on the link, did some reading and found out what it was all about and as usual, the big old 'DOES NOT COMPUTE' error message flashed in my brain.

Basically, Cain, who did an run as the writer for a Mockingbird solo series got chased off of Twitter after Mockingbird was cancelled- she had the temerity to call for Marvel to 'make room for more titles by women about women kicking ass.' The segment of the internet you'd expect to lose it's mind promptly lost it's damn mind after some ugly, online harassment, she deleted her Twitter account.

I've been sort of tip-toeing around the edge of the whole debate over toxic fan culture for awhile now. I've done plenty of reading about the Hugo Awards Mess, Gamergate and the like. I've seen cover controversies (like Spider-Woman) float by on Facebook, the whole 'Thor, a woman? (gasp, clutches pearls)' thing, but I've never really take a deep dive into any of it. Partially because I don't really think I have anything useful to add to the debate- I'm a straight white dude. There are too many straight white dudes out there blathering about these topics. Why do you need to hear from me about it?

Plus, there's the other thing. I don't really feel like I fully belong in some of these sub-cultures/fandoms. I never played video games as a kid. I'm not a gamer. I read plenty of science fiction, but I don't go to cons, I don't read scifi exclusively and I've only in the past couple of years started doing a serious deep dive into comics. I really felt like I didn't have the street cred to do this, so to speak.

But something about this particular controversy bugged me. It bugged me about the whole 'Thor, a woman? (gasps, clutches pearls)' thing too.* It just didn't make sense at all. If you don't like a comic, don't read it. If you don't like a video game, don't play it. If you don't like a television show, don't watch it. Are you seeing a pattern emerging here? Because I am. There should be room in these genres/fandoms for everyone and yes that might mean women have agency and are well-written for once instead of being eye candy. That's what you get when you expand the tent, as it were. Except that you don't have everyone inside the tent pissing out. You've got people inside the tent pissing on the people trying to get into the tent and that just isn't right.

I still don't understand why people are assholes, because this is an incredibly good book. I may not have the greatest understanding of the medium yet, but this was smart, funny, well-written, with a heavy dose of ass-kicking that made the character practically jump right off of the page and smack you in the face. This is a Bobbi Morse I would pay to see more of- and hopefully I get a chance too. Even as Fraction's run on Hawkeye brought that character to life in such a vivid way, Chelsea Cain's run on Mockingbird, brief though it was, took a character that had never had a solo title in her 'life' and gave it one hell of a launch. It's a damn shame this got cancelled, because there's real potential and promise here.

*So did not get the controversy here. Thor's power is derived from the hammer, which says nothing about 'MEN ONLY' just that whoever is righteous and true enough to etc, etc, etc. Doesn't preclude a woman in any way shape or form.

**Unless, of course you love killing puppies, people or other bad things. Don't do that.