November 12, 2016
The Brown Flag Challenge is getting to the deep cuts of the program this week- heading all the way to Sri Lanka to take a look at the flag of the North West Province: 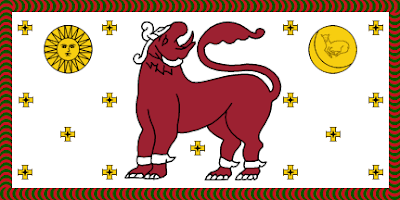 Well, the immediate challenge of breaking down this flag became clear to me immediately. In terms of symbolism, the Wikipedia page provided more of a description. A little more digging revealed that all the provincial flags are based on Ancient Sinhalese Flags- but no more than that. An interesting little tidbit on the CRW Flags website reveals that apparently, the provincial flags are straight up not used. But that's also as of the year 2000, so I'm not sure how much I trust that.

I found a similar looking image on this site over here, but irritatingly, despite the numerous descriptions for the flags below it, they don't have anything for the one right at the top. The closest ancient flag I could find was the flag of the Kingdom of Sitawaka- which has a few similarities but isn't an exact match either. Sitawaka was a fairly short lived Kingdom- but there's no references to a bull in either it's predecessor (the Kingdom of Kotte) it's successor, The Kingdom of Kandy.

So, this is something of a historical mystery at this point- but I haven't exactly done a deep dive into Sri Lankan History either. All I can tell you is that the flag was adopted for the North Western Province in 1987 and that it looks like what you see above.

The North Western Province seems pretty decent though. It's got a load of coconut plantations and it's capital, Kurungela provided me with some tantalizing hints that we could get to the bottom of this- but to no avail. The city itself rose to prominence as a royal capital in the 13th Century when someone jacked a sacred tooth from the Yapahuwa Kingdom and took it to India for a bit. It was brought back and the king that brought it back ruled from Kurungela and Kings of Sri Lanka ruled from there until about 1335 or so. Alas, neither the references to the Yapahuwa Kingdom or the Kingdom of Jaffna gave me any more leads on what the heck this flag means.

So yeah, there's the flag of the North Western Province of Sri Lanka. I actually like it- it's striking, it's brown... it works. Now if I could just figure out what the hell it means!