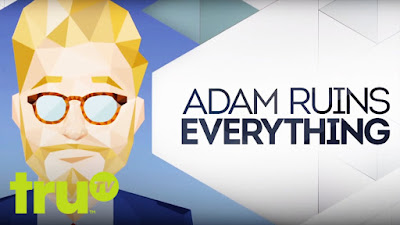 This show is my spirit animal. No, seriously. I kept seeing this pop up in my Facebook feed and I attempted to find it online somewhere, only to be told I had to download the TruTV app to get my fill of it. This, I did and I binged and it was amaaaaaaaaazing. This is what a reality show should be- hell, I'm starting to think that this is what the news should be. The episode on immigration and on voting should be required viewing for anyone and everyone planning to vote next week.

But, before I get to that, let's talk about the show itself. Basically, comedian Adam Conover shows up to tell people the truth about any given topic. Cars, Voting, Immigration, Nutrition, take your pick. Basically, he spends a half-hour raining down an annoying parade of facts about any given topic on unsuspecting players in his little game- but in a humorous and entertaining way. But here's the hook: he shows his work. You don't have to take his word for it at all, because not only do little citations pop up on the screen as you go through the show, but there's also a complete source listing for each and every episode on the website for you to peruse.

In short, it's informative, funny, and fascinating to watch. I love it.

Random things I've learned from this show:
-Listerine is kind of a scam. Used to be an all purpose cleaner./floor cleaner and when they tried to market it as a mouthwash, they ran into an obvious flaw in that people didn't really appreciate being told that they had bad breath, so what did they do? Invented halitosis so they could sell it as a preventative to stop that awful condition they made up to help market their product from causing bad breath.

-Cars are kind of dodgy as well. From dealership cartels (protected by politicians who are all too eager to take the sales tax revenues from car sales) to the history of how they sort of took over the roads (displacing street cars, spreading fear of being hit and killed by their new fangled inventions around) they sort of seem like a big scam.

-The voting episode was excellent! And I was incredibly pleased to note that this show isn't afraid to spank both parties when it comes to the issue of gerrymandering. It was great!

There's a lot more (obviously) to talk about and/or ruin. The whole episode on giving was somewhat eye-opening (especially his deconstruction of canned food drives and why they are, in fact, bad, because they don't produce useful food for food banks since people tend to donate the stuff that's been gathering dust in their cupboards.) since his conclusion was that if you really want to help, give money, but bringing a community together is good too.

It's really odd than in the television landscape of today that a show lodged deep in the bowels of cable (on TruTV, no less) could take the blindingly simple idea of informing the viewers about any given topic they want to talk about and make it work so well. Damn, man, I wish the news would work this way. You could even leave in the comedy. I'd watch the shit out of a news network that did that. A show that isn't running it's facts through a million different filters. A show that doesn't ask you to take it's word for it- it cites it's own damn sources on the screen.  It's a sad reflection on the times that we live in that I find this show so refreshing. It shouldn't be this refreshing. It shouldn't feel like a breath of fresh air. This should be everywhere.

But hey, every avalanche starts with a single snowflake, right?

Overall: One of the best damn things I've had the pleasure to randomly stumble across in a very very long time. It's short (30 minutes) and hits that sweet spot of being smart, funny and it even insists that you not believe it by giving you a list of all their sources. If you're flipping your channels and come across this show- stop and watch it. I guarantee you're going to learn something. **** out of ****