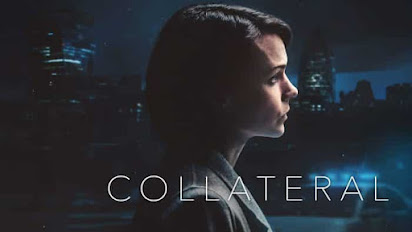 The thing about Collateral that stands out is that it's four episodes and that's it. Less of a television series and more of a Limited Series, you don't worry about hanging plot threads or when the next season is coming out-- you get four episodes and that's it- and you know what? You're fine with that. You don't need more than that- because it allows the series to focus on the story and the mystery.

Carey Mulligan stars as Kip Glaspie, who is assigned to investigate a murder of a pizza delivery man, Abdullah Asif who is gunned down on the street of a London suburb after delivering a pizza to Karen Mars (Billie Piper) the ex-wife of Shadow Cabinet Minister David Mars (John Simm.) Glaspie immediately starts questioning the motives of  Regal Pizza's manager, Laurie Stone (Hayley Squires) after she discovers that Abdullah wasn't meant to deliver the pizza and his colleague Mikey Gowans (Brian Vernel) was. The key witness to the shooting Linh Xuan Huy (Kae Alexander) gives the police a false address as she has overstayed her visa to remain in the UK.

Kip finds Abdullah's sisters Fatima and Mona and discovers that they're illegal migrants. But MI5 suddenly shows up and is very interested in the sisters- as she suspects (correctly) that there's more to this than meets the eye- and as Army Captain Sandrine Shaw (Jeany Spark) returns back to her barracks, she comes under the scrutiny of her senior officer, Major Tim Dyson (Robert Portal.)

In the early going of Collateral, you might be forgiven for wondering where all these disparate storylines are going- and what they have to do with the actual murder that Kip Glaspie is trying to solve. But over the course of the four parts of the series, they get woven together- sometimes quickly and effective, other times in more subtle ways, with payoffs you don't see coming. As a whole, it's an incredible story and a great mystery that touches on issues like immigration, privilege, status, drugs, the military- a whole host of things. There are subtle touches- like the pizza place being owned by someone in Boca Raton and Kip's past as a pole vaulter being brought up over the course of the series.

Does it all work? In the end, yes it does. Might it suffer from asking a lot of questions but failing to provide satisfactory answers? I would say that's a fair criticism as well- but that's also how real-life works sometimes: not everything gets tied up in a neat bow. Overall: Taut, tightly written and anchored by a whole cast of excellent performances-- Carey Mulligan is perfect and there's a nice Doctor Who reunion between John Simm and Billie Piper that's fun too-- Collateral is worth watching. My Grade: **** out of ****

After finishing Hinterland, the Missus and I were looking for our next show to watch and had heard good things about Wallander and went to look for it on Netflix and found Young Wallander instead. We haven't seen a lick of old Wallander- either the Swedish version or the Kenneth Branaugh ones, which are actually on HBO Max- so perhaps we'll check them out after wrapping up Criminal: UK.

Kurt Wallander (Adam Palsson) is a young Malmo cop who is kind of unusual in that he lives on a housing estate Rosengard which is full of immigrants and working-class folks who don't have a particular love for the police. He is woken one night by a fire alarm and witnesses the murder of a local Swedish boy, Hugo Lundgren who is tied to a fence with a grenade in his mouth. A masked man runs by Wallander and pulls the pin out and Hugo explodes. The initial investigation seems to focus on a local boy that Wallander knows- who is on the verge of breaking out of the estate with a professional soccer contract. Wallander eventually clears him- but the club is no longer interested.

The murder of Lundgren sparks anti-immigration protests in the city and Wallander is called into work./ His best friend, Reza (Yasen Atour) is due to be promoted but during the riot, they're separated, Wallander is stabbed and Reza is put into a coma. Wallander's insights into the case win him the notice of Detective Superintendent Hemberg (Richard Dillane) and eventually- despite his objections, he gets promoted over Reza to join Detective Rask (Leanne Best) in working the case.

They start investigating more and he meets Mona (Ellise Chappell) who runs an immigrant shelter for the prominent Munck Family Foundation. The anti-immigrant protests- spurred on by neo-Nazis, tried to burn down the church where the immigrants were during the riots but did not succeed. But Wallander keeps digging and keeps running into Mona (to the point where they start a relationship) and starts to find out that the murder of Hugo Lundgren is just the beginning.

Reading on the interwebs, fans of Old Wallander were not particularly enamored with Young Wallander. I did see a suggestion that had this been a straight-up period piece origin story set in like the 70s it might have been more compelling- and I could probably agree with that- pending, of course, a dip into Old Wallander to see what that's like. But all in all, I think it's pretty good. It tackles the issue of immigration and assimilation in a way that feels genuine and timely for what's going on in Sweden. (Well, what I think is going on in Sweden, American media coverage is either spare or hysterical about other countries, depending on what the corporations running our media outlets want us to care about.) The cast is good, the mystery intriguing and the story ends on an unexpected note that leaves you to wonder how the (inevitable) second season of this show is going to go.

Overall: Swedish, compelling and only six episodes, if this had more episodes, I might say "go watch Old Wallander first" but six episodes makes for a pretty quick binge and if you're into crime/mystery/drama and are looking for something that's not a huge investment on time, you could do worse than Young Wallander. My Grade: *** out of ****