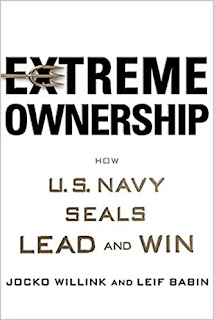 on one of them. And if you hear an interview with the guy, you'll soon hear about how he gets up every day at 4 am to work out- and probably, you'll hear about his books, Extreme Ownership and The Dichotomy of Leadership and finally, I figured I'd heard enough about them that it was time to actually read at least one of them, so I snagged the audio version and gave it a whirl.

Interspersed with accounts of both Willink and his co-author Leif Babin's time in Iraq serving with the Navy Seals, Extreme Ownership methodically breaks down the leadership lessons that both men developed through Seal Training and their time in Iraq. I don't have a lot of experience in the whole genre of 'self-improvement' books but this one stands out right away. First, there's a lot of real world experience- and I suppose since we're dealing with Navy Seals, we should probably emphasize that it's capital R Real and W World experience. You can't really top The Battle of Ramadi in terms of places and environments to develop your leadership philosophy in. Second, the book is well organized, the language simple and refreshingly free of cliches. This is direct. It doesn't mess around. It lays it all out for you.

Some of these seem to be fairly common sense: "Control your own ego" is a lesson that shouldn't just serve you well in business but all over the place in your own life. It's also astonishing that concepts like "There are no bad teams, only bad leaders" aren't more or less universally understood. If you throw your people under the bus, no one is going to want to work for you and people aren't exactly excited about the idea of work to begin with a lot of the time. So that right there sort of puts you behind the eight ball right off.

The other stuff seems like common sense as well: "As a leader you must explain not just what to do, but WHY."  Well, yeah... the WHY matters. People know know WHY they're doing something are going to work harder- there won't be so much "why the hell are we doing this?" going on. What else do Willink and Babin bring to the table?

Build trust with your members.

Lead down the command

Lead up the command.

Complexity can bog down your efficiency and make it harder to know what to prioritize and execute for your business or personal goals. If you want to be a good leader for any given team you're leading, it's kind of important to build trust as well- not to the point where one team member is more important the goals you're aiming towards (Willink and Babin underline this point a lot)- but certainly, trust helps. Your leadership philosophy has to go both ways. If your bosses don't know what you're doing and why you're doing it in plain and simple terms, then you've got to tell them. Simultaneously, if you're a boss and your team doesn't know why you're doing what you're doing you've also got a problem. It all goes both ways.

All of this is fairly interesting and powerful as well. There's so much self-improvement nonsense out there, that finding a book that cuts through the tendency to bullshit and gives it to you straight could, if you wanted it to, make a profound difference in your life. But it's the final piece of the puzzle that really makes you think: discipline equals freedom. Willink makes the inescapable point: if lack of time is your excuse, then that's bullshit. He's got three alarm clocks and gets up at 4am to work out. If you want something badly enough, you can make the time. It's just all about building the discipline to do it.

Overall: When they say this book could change your life, they're not lying. It's just up to you how much you take away from it. As an audiobook, this was a quick listen- and despite the use of some fairly unncessary (in my opinion) sound effects, the narration- provided by both Willink and Babin was solid, if a little intense from time to time for my taste. (I mean, they are Navy Seals, so intensity is probably built in for both guys at this point.) My Grade: **** out of ****