I have not seen Godzilla: King of the Monsters or Kong: Skull Island. I think the last Godzilla movie I 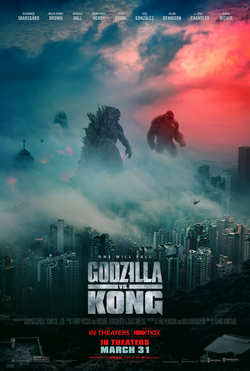 actually sat through was the 1998 one featuring Jean Reno and Matthew Broderick and that god-awful Diddy track that sampled from 'Kashmir.' I think I did sit through Peter Jackson's version of King Kong, which wasn't bad either- but in general, outside of Pacific Rim- which to me was cool because Voltron, giant robots, etc- these movies are not my jam, generally. I've got nothing against them.

But when the Eldest Kiddo is hearing about Godzilla Vs Kong at school and we just got rid of cable, we figured why not give HBO Max awhirl and give it a watch. So, we did.

Five years after the last movie, Kong is living in a giant dome on Skull Island being monitored by an organization called Monarch (I'm assuming this ties back to prior movies, but having not seen them, it meant nothing to me- but I just went with it, because you can't worry too much about plot with these movies.) Godzilla is off being Godzilla. Bernie Hayes (Brian Tyree Henry) is an employee of Apex Cybernetics who has a conspiracy podcast about the sinister activities at a facility in Pensalcola- which, when Godzilla suddenly shows up and attacks the place, seem a lot more credible. Together with Madison Russell (Millie Bobby Brown) and her friend Josh (Julian Dennison) they go off to try and find out the truth of why Godzilla has suddenly started attacking humanity again.

Meanwhile, Apex CEO Walter Simmons (Demian Bichir) recruits Dr. Nathan Lind (Alexander Skarsgard) to go search for a power source in the Hollow Earth (apparently, it's hollow in this cinematic universe- who knew?) but he's a little leery because his brother died in a gravity inversion. They realize that Kong can lead them to Hollow Earth and that he might be able to lead them to a source of power that can defeat Godzilla as well.

Turns out, Kong comes from Hollow Earth- so he's happy to be home. He gets his special atomic Godzilla-powered ax and the various inevitable plot devices get woven together for the final, monstrous confrontation between Godzilla and Kong in Hong Kong. Naturally, because no movie these days- especially Godzilla movies can resist a subplot about human greed and capitalistic rapaciousness, it turns out that Apex Cybernetics has helpfully developed not a Pacific Rim type robot (which is what they kind of tease you with) but a full-on MECHAGODZILLA- so the rumble becomes a three-way fight and it turns out both Godzilla and Kong don't like new-fangled technology any more than the rest of us do and kick the snot out of MechaGodzilla and reach an uneasy truce. Godzilla goes off to do Godzilla things and Kong gets to go live in Hollow Earth where people are still keeping an eye on him.

Look, you don't watch these movies for the plot- and the fact that the movie is at least partially aware of that works in its favor. The world is what it is and doesn't get bogged down in the minutia of world-building because guess what? The whole story is leading you up to the main event and that's what any plot points/developments/characters are there for. To get you to the final rumble between Godzilla and Kong. Was the twist of the MechaGodzilla a nice touch? Yes. Was I curious why so many people remained in skyscrapers while MULTIPLE GIANT MONSTERS fight and tear up half the city? I was. (But I also understand the impulse: whenever the tornado sirens go off, what do people do? They go outside.)

It was- as we predicted- a little too much for the Littles, who retreated to the dining room to watch PJ Masks on Netflix- but as these things go, grab some popcorn, try not to worry about the plot too much and Godzilla vs Kong achieves that most elusive quality in movies: it entertains the hell out of you. My Grade: ** 1/2 out of ****