More specifically, Jeppson's Malort. (No, I don't know how to do the little umlaut thingies over the 'o' so just deal with it alright.) A future post will, of course, go into the full review of Jeppson's Malort- but since I've got a bottle of it now and it's Mixology Monday, I figured, why not have an adventure and see what it can do in cocktail form.

Shout out to r/cocktails for the inspirational post and since I had all of the ingredients for a Malort Highball, I decided to give it a whirl. Here's the recipe, by Paul McGee:

Shake all ingredients except ginger beer and strain over fresh ice in a Collins glass. Top with ginger beer. Garnish with crystallized ginger.

So I did it and this is what it looked like: 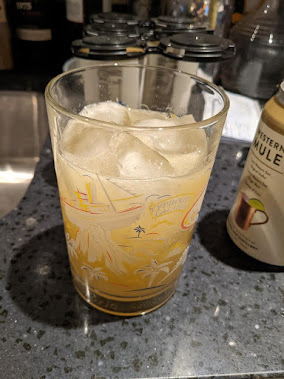 As you can see, I did not garnish it with crystallized ginger, but I included everything else and you know what? I think this might be the first cocktail where every ingredient is so perfectly balanced that they cancel each other out and just produce... a cocktail. The tequila zeroes out the Malort, the ginger beer zeroes out the orange juice, which zeroes out the lime juice and it's just sort of... a cocktail. It wasn't bad by any stretch of the imagination but nor will I say it was good enough that I would run to my bar and make it again.

The recipe even says to "top with ginger beer" and I didn't go as heavy with my pour as I could have, just because I didn't want to get overwhelmed with ginger beer and it still tasted... bland. I mean, that's the only way I can think of putting it. It was just... there. It existed. In defense of this drink: it's entirely possible I screwed up this recipe somehow. But at the same time-- this was... citrus ennui in a glass. Neither offensive nor especially exciting the only redeeming qualities that I could find was that it was cold, wet, and vaguely alcoholic.

I guess the key to using Malort in cocktails is to cover it up with ingredients in such a way that you will have to actively apply your taste buds to actually find the stuff and fail to do so- and having failed to do so, you order another and fail again and then order another because surely, some semblance of flavor other than unidentifiable citrus is going to emerge and then surprisingly, you're drunk and your bartender will be significantly richer.