I saw a few previews for this one and it seemed to tick a lot of boxes. Set in the 70s, check. Crime 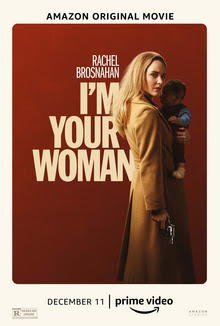 drama/heist drama, check. Rachel Brosnahan running around with a gun. Check. So on an impulse, I decided to give this one a whirl and this movie was not at all what I was expecting.

The movie is set in the late 70s. Brosnahan stars as Jean who is married to Eddie (Bill Heck) who is a professional thief-- it's not really clear whether Jean knows that for certain or just knows that Eddie does something and she just decides not to ask questions about it. The couple can't have or adopt children and Jean has made her peace with that. One day though, Eddie just brings home a baby for Jean to raise.

(By the way: this baby appears apropos of absolutely nothing. And far, far fewer questions are asked about the appearance of this baby than you would imagine.)

Now Jean has a baby to raise and she settles into it just fine but then one night, one of Eddie's business partners Jimmy shows up, gives Jean a bag of money, and hands her and the baby over to Cal (Arinze Kene) who Jimmy promises will help her. Jean learns from Cal that Eddie has gone missing and that everyone is looking for him. Cal gets Jean and the baby, Harry to a vacant house in the suburbs and tells her not to make any friends or talk to anyone.

The isolation and loneliness eventually get to Jean and she befriends her neighbor, Evelyn (Marceline Hugot). After a late-night walk with Harry, Jean realizes that her house has been broken into and calls the emergency number that Cal gave her before escaping to Evleyn's house. There she discovers that Eddie's former associates have taken Evelyn hostage and are convinced that Jean knows where Eddie is. She, of course, doesn't and eventually, Cal shows up and kills absolutely everyone- including Evelyn, and then Jean and the baby have to get moved again. Cal reveals that Eddie murdered his crime syndicate boss and has plunged the city into gang warfare.

Now relocated to a remote cabin, Jean is joined by Teri (Marsha Stephanie Blake) Cal's wife, their son Paul and Cal's elderly father Art (Frankie Faison) who teaches Jean how to use a gun. It takes Jean awhile, but she puts together that Teri used to be married to Eddie but ran away with her son because of how abusive and controlling he became. When Cal vanishes, both Jean and Teri realize that he's probably in trouble and go back to the city to find him. They go to a nightclub, where Jaen gets lost during a shootout and is separated from Teri. They eventually reunite and find Cal and try and get out of the city only to be intercepted by Mike- who crashes the car they're driving and takes Jean at gunpoint, still wanting to know where Eddie is. Jean shoots Mike using the gun that Teri gave her, goes back to retrieve Cal and Teri, and then heads back to the cabin. There they find Art dead from wounds received after taking out two hitmen that Mike sent after them. Both Paul and Harry (the kids) are alive and the two families drive off together.

Overall: I guess it depends on what you were expecting from the film. I think I had Rachel Brosnahan being pissed off with a baby and gun too stuck in my head, so I was expecting more of a gangster movie, but this is definitely more of a neo-noir type of movie. There's lots of silence and it's quiet and there are city streets and empty houses and loneliness and if that's what you look for in a noir type of movie, you've come to an excellent place and you will enjoy this movie.

To me, though, it felt curiously underdone in parts. I mean, Eddie just shows up with a baby and that plot point feels like it could have spawned an entirely different movie, but no one seems to question. (It also helps that as babies in movies go, he's a pretty cute fella.) Brosnahan's performance is excellent throughout as you saw Jean battling with fear and then exasperation and finally anger at being kept in the dark about what's actually going on. Despite that, this movie didn't really rock my socks off. It's decent. Maybe even good. But excellent? Eh. My Grade: ** 1/2 out of ****