Yes, it was the James Nestor interview on Joe Rogan that lead me to the book. I'll just get that out of the 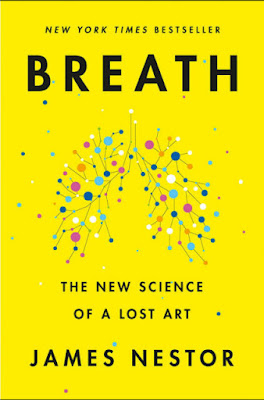 way right up front- but the interview was fascinating enough that I had to get the book and read it for myself. I have a certain amount of personal interest in the topic: horrible allergies over the course of my life have lead to me picking up a delightful case of asthma that pops up now and again as well. So this year has been a bundle of personal paranoia with COVID as it is as my lungs probably aren't that great. to begin with-- but even before then, spirometry tests at the allergy doctor weren't making me feel all that great about my lungs either. (And yes, I know spirometry isn't exactly an exact science, but still: it's kind of alarming when you're not even 40 to see things like, 60% lung capacity flash up on a screen.)

So I was very interested in the interview and couldn't wait to get my hands on the book.

Mind. Blown. The nose actually acts as a more effective filter than the mouth does and oxygenates your blood more effectively. The knowledge bombs keep on coming from there: our mouths and teeth have actually been getting smaller in the past century or so and as a result, there's been a corresponding rise in things like allergies, sleep apnea, crooked teeth and asthma-- the evidence for which is pretty convincing as Nestor spends a lot of time looking at skulls and skull collections and even goes into the catacombs of Paris to find a bone room-- our ancestors had straighter teeth and less dental problems than we do because their mouths were bigger.

Nestor actually participates in a study to prove the difference between mouth breathing and nosing breathing at Stanford with a friend of his he's met along the way who's actually convinced that more Co2 isn't a bad thing- and guess what? It turns out there's some science behind that notion- which seems crazy to the average reader- that makes a certain amount of sense.

He talks about yogis who could put themselves into a state of yogic sleep and control and regulate their body temperature to the point where they could make one hand get warm- or raise their body temperature whole degrees while meditating outside in the snow. He looks at the ancient texts that go back thousands of years from multiple cultures that all emphasize the health benefits and importance of proper breathing. He participates in this crazy thing where hours of heavy breathing can put people into a hallucinatory state that's almost like a psychedelic trip.

Nestor does inject a note of caution by the end of the book though: this isn't a cure-all. Can breathing better help optimize our health and help with a whole host of problems? It sure looks that way. Can it cure cancer? Probably not.

(Most helpful of all: he includes an appendix with descriptions of how to do some of the basic breathing exercises he describes in the book and links to a lot of good resources.)

Overall: if you have asthma, allergies, sleep apnea or just trouble sleeping this is absolutely a book you should get ahold of and read. Since I listened to the interview and read the book I've been trying to breathe more through my nose than my mouth. I can't say with certainty if it's helping, because it could be entirely psycho-somatic, but it sure feels like it is. My Grade: ***** out of *****