I don't know what it is about brandy. It's just not my go-to booze for either drinking straight or cocktails. I don't really have anything against it- it's just that for whatever reason, I just don't drink it all that much. But I do have some kicking around the liquor cabinet and the sidecar is considered one of the six classic cocktails described by David A. Embury in his 1948 work, The Fine Art of Mixing Drinks. And since it's one of the 'classics' and since I had both brandy and Cointreau in my liquor cabinet, I decided to make a sidecar and this is what resulted: 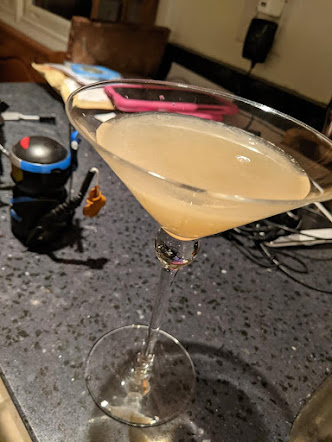 I actually made two of these. I didn't have fresh lemons for this one, so I used some lemon juice we had kicking around the place. But, in the name of purity, I grabbed a couple of lemons and squeezed some fresh lemon juice to see what it was like with the real deal. Both were pretty good at the end of the day, but weirdly enough, I'd give the nod to the bottled lemon juice- whether it's the concentrate or just the recipe, more of the tartness of the citrus came through. It should be said: neither of these was a bad cocktail. If you're in a cocktail rut and aren't looking for a martini or a daiquiri, the sidecar might be the shake-up you're looking for.
In terms of the recipe, I dug up The Spruce Eats recipe, which is as follows:

In terms of history: the name is what you think it is- the sidecar of a motorcycle. The Ritz Hotel in Paris claims the origin, but others cites a bartender at Buck's Club in London. Still others credit an American Army Captain in Paris during World War I and credit the name to the sidecar he used. Whatever the origin, the sidecar remains a classic worth taking out for a spin. If you've got brandy to use up and are short of cigars or the necessary accoutrements to make a Wisconsin Brandy Old Fashioned (another good use of brandy, in my opinion- I drank two and was heartily sick the next day!) then the Sidecar is quick, easy and perfect for a pre-dinner cocktail hour. Brandy will probably never be one of my favorite liquors, but if I've got some, I'll probably be making more sidecars. 7/10 would drink again.