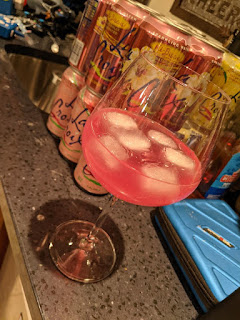 Ain't that pretty? I got to admit they look extremely striking. The first recipe I followed pretty strictly- and used 6 oz of ginger beer and I don't think it was quite enough-- the syrup was still kind of pronounced and well, syrupy- but the second one I cashed the ginger beer and not only was it well-balanced, but the syrup was constrained and the ginger wasn't going crazy either so it ended up being really nice.  Here's the recipe I adapted:

Okay, some immediate differences: I used prickly pear vodka and not jalapeno-infused vodka and didn't bother with the lime juice or the lime wedges. (Because again, garnishes... eh.) All in all, this was a delightful and refreshing drink that will probably be more in my repertoire come warmer weather- whenever that shows up- hopefully soon. 10/10 would drink again because I don't mind the ginger beer and it's a pretty easy and delicious way to use both prickly pear vodka and prickly pear soda.