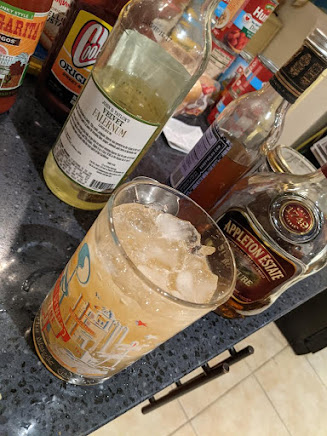 So, I was going to take a run at a Queen's Park Swizzle- but then I saw this picture on Reddit and realized that I had no mint and if you take away the mint, you're essentially making a Daiquiri and even with using snow instead of crushed ice, it was still a bit boring and would never look as good as that picture! I had plenty of grapefruit laying around the place and I scored a couple of limes and then I realized what I should make: The Navy Grog.

(Historical tidbits: per Smuggler's Cove, Richard Nixon was a fan of these:

Legend has it that he would slip away to the D.C. Trader Vic's, Sixteenth and K, housed within the Capitol Hilton Hotel. Often, according to Henry Kissinger, Nixon would insist on having cabinet members in tow. Later, during the Watergate hearings, story has it that after everyone had gone home, Vic's would keep the bar open with just one bartender, and Nixon would sneak in a back entrance at three in the morning, have a few Navy Grogs, and pour his heart out to the bartender. And, true to bartender code, that bartender has never actually shared what Nixon told him over forty years ago.

Also, Phil Spector gets mixed up with these as well:

The night he killed Lana Clarkson, he went on a bit of a bender. One of his stops on his booze tour was his regular haunt, Trader Vic's Beverly Hills, where he ordered not one, but two Navy Grogs. Trader Vic's bartender Ming Fong Chu would later be called to testify at the murder trial as to the potency of the drink. He confirmed that yes, each Navy Grog contains three shots of rum, and was one of the strongest drinks Vic's served.

So, make of those what you will.)

All right, so here's the recipe:

Flash blend and open pour with gated finish into a double old fashioned glass. Garnish with a mint sprig or rock candy stick and a toast to sailors of yore.

There's also a note encouraging drinkers to "Dare To Compare" and try Don The Beachcomber's version by swapping out the Demerara syrup and Allspice Dram with some honey syrup and seltzer. His version also was traditionally served with an ice cone, which, needless to say, I didn't bother with.

I also didn't quite follow the recipe listed above either-- I've got Pusser's Navy Rum and Appleton kicking around currently- no overproof stuff at the moment, as I've got to investigate a little further and see if there's something better than Bacardi 151 around locally I can use. So, for my third ounce of booze, I threw in some Falernum, which I think worked really well. The Allspice Dram brings a lot of aromatic notes to any party- but combined with the Falernum it just kicked it up to another and more delicious level.

I also didn't bother with an ice cone-- previously, when it called for crushed ice, I'd get all fancy and throw some ice in a blender to "do it right" but now I just throw some ice in a baggy and smack it with a rolling pin until I achieve the desired affect and then call it good.

Overall: I filled my glass with crushed ice and drank one of these and it was delicious. I also had so much ice left that it seemed a shame to waste it all, so I made a second one and drank that and guess what? It was also... delicious. I don't know whether it's the syrups combined with the fruit juices that tamped down the rum and falernum enough to hide the booziness of all, but a few of these you could have a very good night indeed. (Or, you know, murder someone if you're Phil Spector.) No surprise, I'm going with 10/10 would drink again on this one.