January 24, 2021
Pixar keeps finding new ways to raise the bar that are continually astonishing, so it's no surprise that 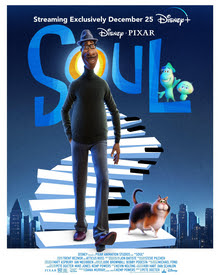 without hesitation that I can safely say that Soul is probably their best movie to date. (Weirdly, I feel like you can make a case for every subsequent Pixar being their best movie to date- but in the case of Soul, it feels like it's actually true.)
The story of Joe Gardner (Jamie Foxx), a middle school music teacher in NYC who has dreams of a career in jazz. His mom, Libba (Phylicia Rashad) objects to it- especially after he gets a solid job offer for a teaching gig at his school. She wants him to focus on his financial security. Joe pushes forward anyway and when his former student Curley (Questlove) calls him up to tell him that respected jazz musician and saxophone player Dorothea Williams (Angela Bassett) is looking for a pianist for a gig that very night, Joe jumps at the chance. He impresses Dorothea who decides to give him a shot for the gig that night- and as he's rushing home to get ready for the gig, he falls down a manhole.
He finds himself as a soul heading into the 'Great Beyond'- but refusing to die yet before he gets his shot at a 'big break', he tries to escape but winds up in hte 'Great Before' where soul conselors, all named Jerry prepare unborn souls for life. Each soul gets a badge that, once the fill it out with traits grants them passage to Earth. Joe is mistaken for an instructor and assigned 22 (Tina Fey) a cynical soul who has steadfastly refused to live on Earth for millennia now- she doesn't see the point. She needs to figure out her "spark" to complete her badge but agrees to help give it to Joe so that he can return home. Joe's attempts to help her find any kind of inspiration prove futile, so they had for 'the zone.'
(Okay, at this point, we gotta tangent a bit here: if you want to make a case that Soul isn't Pixar's best movie from a story point of view, I might be able to listen to your arguments. But by far, the art on this movie is gorgeous- no contest, not even close. Plus, the concept of 'the zone' where people go when their passion sets them into a euphoric trance is such a cool concept brought to life here.)
While they're, they meet Moonwind (Graham Norton), the captain of a psychedelic galleon with a troupe of 'mystics without borders' who agree to help Joe, who's been in a coma since his fall. But when Joe goes back to Earth, he ends up in the body of a therapy cat, and 22 ending up in his body. Initially scared to death, 22 finally begins to understand Joe's body, life on Earth and the importance of human connections- and when they find Moonwind on Earth to help get their bodies switches around, 22 decides she wants to find her purose on Earth- but before they can have that argument, Terry (Rachel House) catches up with them and brings them back to The Great Before. 22 finds that her badge has been filled out, but Joe says that it's because of his experiences and 22 throws the badge at him and runs away. Joe then learns that a spark just means a soul is ready to live- not that they've found their life's purpose.
Joe gets back to Earth in the right body and has a great performance with the Dorothea Quartent, but it's not as fulfilling as he expected. Worse, he's got to come back and do it again the next night. This helps Joe realize his selfish ways with 22 and he uses items she collected while on Earth to inspire himself to play his way into 'the zone' where he goes and finds her- but she's a lost soul now and it takes Joe to bring her back to herself and give her the badge back so she can go to Earth. Having done this, Joe is ready to head to the Great Beyond, but Jerry stops him and as a thank you for inspiring them, they give him another chance at life which Joe accepts, now ready to live and appreciate every moment he has.
I don't know how Pixar keeps doing this, I really don't. It's incredible... there's no other word for it. They make a kid's movie that will entertain your children but they pack it chock full of really deep and meaningful philsophical and metaphyical themes about life and the meaning of life and the afterlife or the beforelife- its like Inside Out but kicked up a notch to explore the meaning of life and not just your feelings and emotions. The art is gorgeous. The concepts amazing. The jazz wonderful- which is weird for me to say because jazz is not a genre of music I'm all that familiar with at all. There's really nothing else to say- Pixar just keeps doing this and doing this and doing this and I hope they never stop. My Grade: **** out of ****