January 04, 2021
Brandon Sanderson is one of those authors that I've always meant to sit down and explore, but never 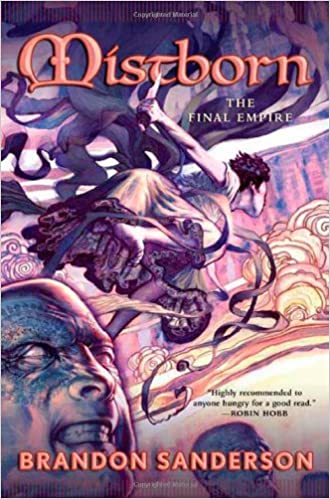 got around too- but after finishing The Wheel of Time, I felt like I could no longer put it off. He did such a great job finishing out that series, that I figured I might as well take the plunge and start exploring his own work- and thanks to an Audible credit, I snagged Mistborn: The Final Empire and started listening.
The story opens on a plantation run by a nobleman- part of the aristocracy of the Final Empire that rules over the vast underclass/serfs known as Skaa. The overseers on the plantation are cruel and one of them notices a Skaa that is less subservient than the others and wonders about it. That night in the Skaa quarters, he reveals himself to the other Skaa as Kelsier, the survivor of Hathsin- who kills the nobleman in charge of the plantation and forces the other Skaa to flee into hiding to avoid reprisals.
Events flip forward a bit and we meet Vin who is a street urchin that is wary and much abused by Kamen, the leader of the theiving crew that ensures that she doesn't starve. She's recruited into Kelsier's crew after his brother Marsh tells him that Vin is a Mistborn, an allomancer who can manipulate the power of various metals with telekinesis. Kelsier has put together his own crew- including Breeze, Hammon, Dockson, Spook, Clubs, Marsh and Yeden- who represents the Skaa rebellion and is looking to acquire an army to lead a revolution. Kelsier's plan? To take down the Final Empire and more specifically the immortal Lord Ruler.
The crew think that Kelsier's plan is absolutely crazy- but he brings them around. Basically, he wants to destabilize the capital of Luthadel  by causing a house war between the nobility and luring the garrison out to put down the rebellion raised by the Skaa army they're going to build- once the garrison is gone and the nobility is fighting one another, their plan is to sneak into the palace and steal The Lord Ruler's  hoard of atium, the metal that's the cornerstone of the economy of the Final Empire.
They set to work, with Vin assuming the role of Valette Renoux, a noblewoman whose job is to infilitrate the aristocracy and sow dissension amongst them where necessary. Along the way, she meets Eland Venture, the scion of the powerful House Venture and gradually falls in love with him- learning that he and his young noble friends meet and read forbidden books and discuss how to build a better and more just society. The rest of the crew thinks she's crazy for insisting that not all nobles are beyond redemption, but gradually, they begin to see her point.
There are major setbacks along the way with their plan, but eventually, Kelsier confronts the Lord Ruler himself and is slain by him, which turns him into a martyr that lights the spark of the rebellion that they've hoped for- and Vin is the one who gets to have the final showdown with the Lord Ruler-- who she kills, but not before he leaves an ominous warning of great doom. The Final Empire begins to collapse and Eland Venture starts the process of creating a new and more democratic state, Vin is left to wonder at the Lord Ruler's warning and what it might mean.
What immediately stands out in this book is the magic system. Granted, it's been awhile since I've really delved seriously into epic fantasy, but I can't, off the top of my head think of one that's similar to the allomancy and ferruchemy described here. The level of detail that Sanderson put into the worldbuilding here is both impressive and daunting- but the fact he put so much work into it also makes the book that mucb better and raises it to a notch or two above the rest of the genre.
The world of Mistborn is also somewhat atypical-- if anything, the constant ashfall that Sanderson describes and the sort of dirty, dystopian, hardscrabble existence sort of puts me in mind of Mordor- at least a little bit. It doesn't quite put me in mind of steampunk- but it sort of comes close in many ways. It's another point in Sanderson's favor that makes Mistborn immediately jump out at you.
A final point: the timescale of this book also works in this favor. It's not a simple heist the protagonists are trying to pull off- it's a full scale Revolution and it takes time to percolate- that time makes the climax of the novel more satisfying and more believable- this is a conclusion for all the chracters that feels earned and is a complete one. Is there an unanswered question that leaves room for the sequel? There sure is- but this first volume can stand alone if it has too.
Overall: My first trip into Sanderson-Land outside of The Wheel of Time was well worth the wait. Can honest reccommend Mistborn whole heartedly and can't wait to get around to the second volume of this trilogy.  My Grade: **** out of ****