I don't know what it is about movies involving food, but I'm a sucker for all of them and The Hundred- 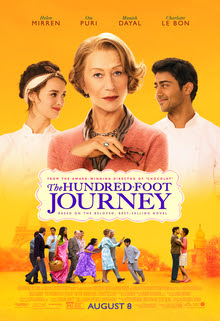 Foot Journey is no exception. Described by Wikipedia as a 'comedy-drama' film it was directed by Lasse Hallstrom with screenplay by Steven Knight and released in 2014. (It's based off the novel of the same name by Richard Morais.)

The film opens in Mumbai, where the Kadam family runs a prosperous restaurant. The second oldest son Hassan (Manish Dayal) is being groomed to take over from his mother (Juhi Chawla) as the restaurant's main cook. He accompanies his mother to the market to shop for sea-food and can smell to find out the best quality one. Following an election dispute, a mob attacks and firebombs the restaurant. Abbu Kadam (Om Puri) get the guests out, but Hassan's mother dies in the fire and the family flees, seeking asylum in Europe- first in London, then onto mainland Europe, searching for the best place to rebuild their restaurant.

The brakes on their van fail in the south of France, near the village of Saint-Antonin-Noble-Val. Marguerite (Charlotte LeBon) a sous chef at the upscale French restaurant in the village passes by and helps the Kadams find an auto repair shop and puts them up in a guest house. She brings them food for the night and the Kadams are amazed at the quality and availability of the food in the village and when Abbu finds that there's a restaurant for sale just one hundred feet from the fancy, Michelin-starred restaurant in the village named "Le Saule Pleurer" that's run by Madame Mallory (Helen Mirren).

Being one hundred feet apart a rivalry springs up between the two restaurants with Madame Mallory doing things like buying all the ingredients the Kadams need in the market  and Abbu playing Indian music as loudly as he can to create a festive atmosphere eventually it all escalates to one of Mallory's chefs, Jean-Pierre (Clement Sibony) and a few of his friends trying to burn down the new restaurant and spray painting "France for the French" on the outer wall. Hassan manages to put the fire out, but gets burns on his hands. Mallory fires Jean-Pierre and then goes to clean off the graffiti herself.

Hassan heads from Marguerite that Mallory hires potential chefs my asking them to cook her an omlette- and he asks her-- but with his injured hands, she has to do it under his directions. She loves it and recognizes his potential- and admits that his pigeon dish was good and eventually even Abbu relents and allows Hassan to go work for Mallory. Eventually, his cooking involves into a fusion of Indian and French cuisine and lands Mallory's restaurant it's second Michelin star-- and after that, the offers come in. Abbu and Mallory make amends and begin a romance of sorts, while whatever budding romance tha Hassan was trying to brew with Marguerite seems to sour.

A year later and Hassan is receiving critical acclaim for his cooking and people are thinking he might go for a third Michelin Star for the Paris Restaurant he's working at, but instead he decides that he misses his family- and Marguerite. So, he returns home and invites Marguerite to join him in a business venture- namely a stake in Mallory's restaurant so they can earn it a third Michelin star.

Overall: any movie about food needs to really get the food right and this movie does-- anything with Helen Mirren in it automatically gets kicked up a level, but the rest of the ast holds their own- and Om Purri bounces off of her nicely over the course of the movie. If there's a mild fault to this movie, it's probably Hassan's romance with Marguerite-- they seem to be more colleagues than in love, but Hassan's relationship with food- especially being an immigrant from India trying to cook in Europe- and France especially, is at the heart of this movie and if ingredients are lacking in the romance department, they're more than made up for by Hassan's relationship with food. My Grade: *** out of ****