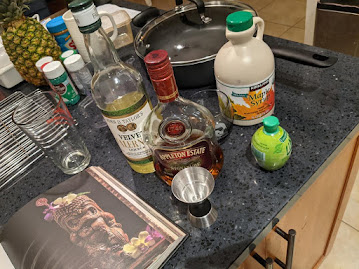 I suppose before we get to the actual drink itself, we need to introduce the concept of Rum Swizzles. The original Rum Swizzle is hailed as 'Bermuda's national drink' and basically, it's rum, fruit juice and what wikipedia refers to as a 'flavored sweetener' such as grenadine or falernum. They're generally shaken or stirred with icy.

The concept of a swizzle- which is pretty much rum + ice + something else have been kicking around since the mid-18th century- references to them have been found in such diverse locations as Fort Ticonderoga in New York, Saint Kitts and Barbados in the Caribbean or even Great Britain. The exact origin of the Swizzle seems to be up for some debate as well: A 1909 book by Edward R. Emerson said they came from Saint Kitts. Another author (Frederick Albion Ober) noted in 1920 that a great drink hailing from Barbados was the swizzle, where the combination of liquors, sugars and ice were "whisked to a froth by a rapidly-revolved 'swizzle-stick' made from the stem of a native plant." (Wikipedia says either the 'swizzlestick tree' or an all-spice bush.

Allegedly they were also the drink of choice for the world's first-ever cocktail party held in London in 1924. But today, The Swizzle Inn of Bailey's Bay- which is Bermuda's oldest pub claimed the honor of being the home of the Rum Swizzle.

Note to self: go to Bermuda... (actually, I wonder how expensive that would be.)

The particular take on the swizzle is taken from Smuggler's Cove and it's the Kaieteur Swizzle, named after the famous Kaieteur Falls of Guyana- which is the largest single drop waterfall (and one of the most powerful) in the world.

Okay, confession time: it says to garnish with something called a Swizzle napkin wrap and a mint sprig, but y'all know how I feel about garnishes. And also, sadly, I did not have any rum from Guyana, so I had to use good old fashioned Jamaican rum instead. (For syrup, I used the Organic Pure Stuff from Costco- so, I did step up from the typical grocery store shelf syrup here.)

This is a really solid drink. I feel like the syrup cuts back on the lime of it all and the falernum pushes back on the rum a bit, so what you get is a really nice balance between the sugars/fruit/liquor and it packs a bit of a punch as well. This time out, I just put some ice in a baggie and smashed it with a rolling pin to crush it up a bit- but I have gone all out and used a blender to get that sort of snow-like, slushie consistency to my crushed ice. Either way works, I think. 10/10 would drink again.