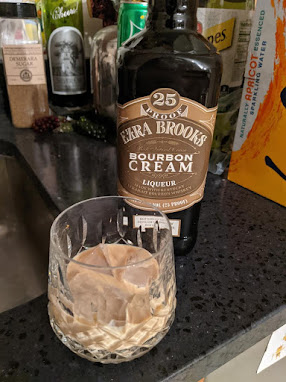 Hey, it's a Boozehound Unfiltered post! I've been going pretty heavy with cocktails of various flavors for a few months now so I haven't been able to get one of these posts in- but the holidays have been good to me, Booze-wise, so expect a truimphant return of these posts as we head into 2021- but now that's done, let's talk about this month: Ezra Brooks Bourbon Cream.

I've been hearing about Bourbon Cream on and off from fellow whiskey drinkers for a few months now- but it seemed curiously hard to find- or at the very least, it didn't spring off the shelf when I went looking for booze these past few months. I suppose at the outset that we've got to make it clear: this isn't the delicious, delicious biscuit from the UK-- that takes it's name from the Royal House of Bourbon.

So what exactly is bourbon cream? Strangely enough, there's no entry in wikipedia for the stuff- as of yet-- but Black Button Distilling offers the kind of, "Thanks, Captain Obvious" definition that may as well serve as a starting point for our adventures in this regard:

Bourbon cream is a unique blend of bourbon and cream. When cream and bourbon get together, you have a spirit that is similar to Irish Cream, but is richer and bolder in taste with caramel and vanilla notes.

In other words, it's largely what it sounds like: bourbon + cream gets you bourbon cream. (I've heard that Buffalo Trace is the Bourbon Cream to find-- but this Reddit thread reccommends a few I've never heard of that might be worth picking up if you find yourself in the hunt for a good bourbon cream. I ended up with Ezra Brooks Bourbon Cream- which is barrel aged Kentucky Bourbon mixed with cream. Tasting notes are kind of wonky with this one, because it's not straight whiskey- but here's my impressions:

Nose: Honestly, the aroma isn't a big part of this stuff. It smells of cream- which I know is unhelpful when you get right down to it- but this isn't straight whiskey. The taste is what you're after here.

Body: The viscousity is really nice here-- a lot of cream-based liqueurs can be really thick and heavy, but this one is nicely balanced. I think the secret to the success of this combination is the bourbon-- you could go wrong with this very easily I think and make it too sweet. But the bourbon restrains it nicely.

Finish: Smooth vanilla at first and then the caramel comes rushing in for a beautiful combination.

Overall: This stuff is delicious and dangerous... you could have yourself a truly delicious and enjoyable evening with a bottle of this stuff. 10/10 would drink again- and I'll be on the look out for different varieties so that maybe I'll be able to compare and contrast a few.