It's Monday, so let us begin the work week by celebrating that most simple of drinks that's rapidly becoming one a favorite of mine- the Scotch Highball. 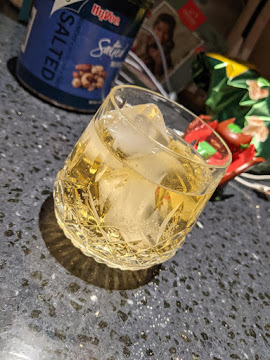 I'm going to have to shout-out this excellent video on YouTube from How To Drink, because it was this that started me down the road to the glories of the Scotch Highball. A favorite of Winston Churchill- who apparently did about 3-4 of these bad boys a day (though this source suggests they were 'weak' ones with no more than an ounce of whiskey in them.) It's also worth noting that this source also added that he'd do an imperial pint (20 oz.) of champagne and and ounce of brandy and lunch and dinner time, so hot damn did he drink a lot of booze daily.

I've never been a huge fan of brandy-- though to be fair, I also haven't tried that much brandy either- and if I'm going to drink champagne like Churchill I'd really want to be a completist about it and score some Pol Roger champage which was apparently his brand of choice. (Though, holy shit, 20 oz of champagne? I can do mimosas just fine and a flute of champagne- maybe. 20 oz seems like a hell of a lot.) That leaves us- if you're wanting to dip into the world of Churchillian drinking, with the Scotch Highball.

For the purposes of historical accuracy- since Churchill liked Johnny Walker Red (and Black) in his Scotch Highballs, I grabbed some of that and some seltzer and here's the relatively simple recipe:

Over ice. In a glass. (Garnish with an orange twist)

Okay, confession time: I don't really do garnishes. Is that bad? I mean, obviously, for things like a Manhattan, I'm going to keep a jar of cherries knocking around the joint so I can float a couple in there. But orange twists? Maybe I need to be a good would-be bartender and practice some knife work, but I can never really get a good twist like the pros do and as for expressing the 'citrus oils'...  eh. I'd much rather just drink my drink and not worry about all that kind of stuff, you know? I suppose at some point, I'll have to learn how to do it correctly, just for the sake of my own personal knowledge, but right now? Thanks, I'll pass.

Overall though, these are kind of bangin'. If you don't like straight whiskey and don't have time to sip whiskey to enjoy it, you can't really go wrong with these. They're deceptive though- two or three of them could go down real easy and then you would be having a very good time indeed. 10/10 would drink again.