There have been three of these movies, believe it or not and this was the first one and let me tell you: 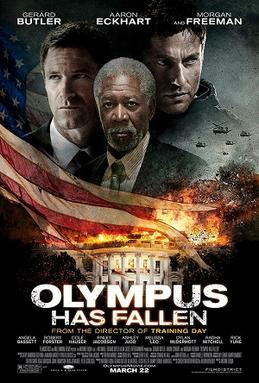 this movie is absolutely fucking ridiculous and you know what? That's okay. There's a certain flavor of action movie that is absolutely preposterous but there's guns and explosions and one man fighting against impossible odds to defeat the bad guys and you just sit back, watch it and enjoy and shovel popcorn into your mouth and wait for the inevitable vengeance of the good guys to happen.

Olympus Has Fallen is one of those action movies- but it's well made and looks stylish as hell.

The movie opens with the First Family- President Benjamin Asher (Aaron Eckhart), First Lady Margaret Asher (Ashley Judd) and their son Connor (Finley Jacobsen) are heading out to leave Camp David to go to a Christmas Party- the head of their Secret Service Detail is former Army Ranger Mike Banning (Gerard Butler) who maintains a close, personal relationship with the family. On the way to the Christmas Party, the Presidential Limo, the Beast spins out on an icy bridge and Banning manages to save the President before it goes over the edge, but isn't able to save the First Lady.

Eighteen months later finds Banning working desk duty in the Treasury Department, but wanting to get back to Protection Duty-- the head of the Secret Service, Lynn Jacobs (Angela Bassett) advises Banning to be patient that the President has come to understand that Banning did the right thing on the bridge but doesn't want to be reminded of it every day. In the meantime, they're gearing up for a visit from the South Korean Prime Minister (Keong Sim) and his security detail to discuss ongoing and rising tensions in the region.

Once the South Korean Prime Minister is in the Oval Office, things start to get crazy. A C-17 breaches the restricted airspace around the White House and shoots down the two jets sent to get it out of the restricted airspace and then the President, the South Korean Prime Minister and their security details are rushed into the Presidential bunker. Then the C-17 strafes a shitload of civilians and takes out the Washington Monument before crashing onto the South Lawn and then everything starts blowing up and a surprisingly large number of enemy commandos take the White House and kills a shitload of people in the process. Who manages to evade the enemy forces and make his way into the White House? Oh that's right, Mike Banning.

The Speaker of the House, now acting President Allan Trumbull (Morgan Freeman) and the rest of the government figured out that the attack on the White House was carried out by the KUF, a North Korean Ultra-nationalist group intent on forcing the US to withdraw from the DMZ and leave South Korea undefended- but also, their leader, Kang (Rick Yune) wants to access the Cereberus system that controls America's nuclear arsenal so he can blow all the ICBM's up in their silos and turn America into an irradiated wasteland in revenge for his mother's death. (She stepped on an American landmine while they were fleeing North Korea, so obviously, his idea of revenge is totally proportionate here.) Guess who has the codes? The Secretary of Defense, the Chairman of the Joint Chiefs and the President. And for some reason passing understanding, they can't change the codes.

Banning retrieves the President's son and gets him to safety- thus removing a fairly important piece of leverage against the President. The acting President and his team launch a SEAL assault to take back the White House but that fails and Kang shoots the Vice President. He then follows this up by attempting to execute the Secretary of Defense (Melissa Leo) on the front lawn of the White House, but Banning rescues her instead. With his commandos dwindling, Kang stages an escape-- but despite the helicopter crashing, Banning realizes it's a ruse and in one final confrontation, kills Kang, saves the President and deactivates the Cerberus system just in time to prevent America from being irradiated. In the end, Banning gets his old job back as head of the President's security detail.

Overall: look, if you accept the fact that this is an enjoyable action movie that's entertaining as hell and just shut up and eat your damn popcorn, you will like this movie. But, if you step back a second, you notice the glaring flaw in this film: the 25th Amendment. One would hope that should this ever happen in real life, the 25th would be invoked immediately and we'd get a new President and Vice President and change the codes to everything right away. Had this happened in this movie, however, it would have been about ten minutes long. Also, the fact the intelligence community didn't pick up on the fact that a decent number of terrorist commandos had infiltrated Washington D.C. would be a massive intelligence failure IRL. Like on the levels of the Bay of Pigs or WMDs in Iraq.

Oddly enough, the surface to air missile batteries on the roof of the White House struck me as the most realistic aspect of the whole movie. It wouldn't surprise me at all if they're hidden away up there somewhere.

The cast is solid- Robert Forster is good as the Army Chief of Staff. Angela Bassett is just good in everything she's in, really-- but man, was this a waste of Ashley Judd. She was in the movie for about five minutes. Ditto with Melissa Leo- who was in the movie for slightly longer as the Secretary of Defense, but still... underutilized. My Grade: ** 1/2 out of ****, because despite it's obvious flaws, it was still an enjoyable move.