This Week In Vexillology #297

October 19, 2019
This week, we continue our march through the strange and off the beaten path category of 'unrecognized' countries out there in the world. We're still sort of sticking in the Russian periphery, but we're not picking on the Republic of Georgia anymore: Transnistria and the Republic of Artsakh! 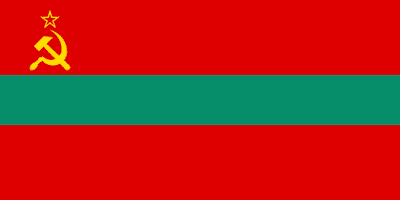 Internationally recognized as part of Moldova, Transnistria is a little narrow strip of land that's sandwiches between the River Dneister and the border of the Ukraine. It's history is a little complicated: it became an autnomous polity in 1924 when the Soviets proclaimed the Moldavian ASSR- which included today's Transnistria- but not anything from Bessarabia, which was at the time, a part of Romania. Eventually, the Soviets took Bessarabia, melded it together with what was the Moldavian ASSR at the time and created more or less modern Moldova.

This lasted until perestroika and glastnost really got going. The liberalization kicked off a surge of nationalism in many of the SSRs, including the Moldovan SSR. They promoted pro-Romanian nationalism and ethnic Moldovans- the Transnistrian area's ethnic and linguistic make up differed significantly from the reast of Moldova and tensions ratcheted up until a brief and nasty little war broke out in March of 1992. By July of 1992 a ceasefire had been declared and has held ever since then, with Transnistria being more or less independent and the Moldovan government exercising no control over any areas across the Dneister.

Their flag is well...  boring. It's just the flag of the Moldovan SSR- but here's the kicker: all the Communist/Socialist symbolism on the flag? It's purely historical at this point as Transnistria isn't a socialist state-- and it's the only polity in Europe that uses the hammer and sickle on it's flag. In 2009, they also added a second flag-- making it probably the only country I can think of with not one, but two official flags. Their second flag is pretty much identical to the Russian Federation but with a slightly different aspect ratio- again, also pretty...  boring. So, points for being an interesting geographical and political anomaly, but minus some points for a distinct lack of creativity when it comes to your flag design.

Next up, the Republic of Artsakh! 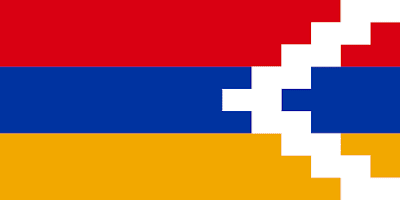 Armenia and Azerbaijan have a heck of a complicated border situation going on at the Republic of Artsakh is the Armenian half of the equation. Azerbaijan has the landlocked exclave surrounded by Armenia, Turkey and Iran in the Nakhchivan Autonomous Republic and jutting into Azerbaijan on the opposite border you'll find the Republic of Artsakh. The war that lead to it's creation however, was a brutal one that lasted from 1988 to 1994 and saw ethnic cleansing on both sides- the Nagorno-Karabakh War is probably high on the list of wars you've never heard of.

So, let's talk about the flag.  It's interesting...  and I'm going to say that I'm actually kind of okay with this one as it more or less sums up the actual status of Artsakh. The red/blue/orange tricolor is of course, the tricolor that represents the Republic of Armenia. In this case, it stands for the Armenian heritage, culture and population of the area as well as the regions aspirations to be reunited with their 'motherland.' The white jagged triangle running through the far end of the flag stands for it's geographic separation from Armenia proper.

And that's more or less the flags of Transnistria and Artsakh! Remember, until next time keep your flags flying- FREAK or otherwise!