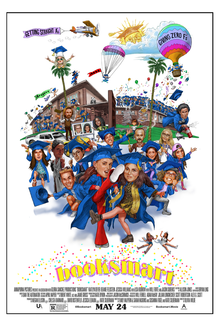 There was a lot of hype surrounding this movie when it dropped in the spring and when the Missus was away for the weekend with the Mother In Law, a snagged it from Redbox (along with Toy Story 4 and Spider-Man Far From Home for the kiddos) and when I got them to bed, I sat down and gave it a watch to see what all the hype was about.

Amy (Kaitlyn Dever) and Molly (Beanie Feldstein) are two high school seniors who have been best friends since childhood but are considered pretentious and stuffy by their peers. Amy has been out for a couple of years now and has a crush on a girl named Ryan (Victoria Ruesga). Molly urges her ask her out before they graduate. Going to the bathroom, Molly then hears her classmates talking about her and confronts them by revealing that she got into Yale while they were busy partying. When they, in turn, reveal that they too had gotten into good schools despite partying, Molly is stunned. She panics, raging at the realization that she and Amy have spent their high school years working their butts off to get into good schools and not allowing themselves to enjoy life even a little bit. As such, Molly proposes they go the premier graduation party of their senior class that's being held at Nick's (Mason Gooding) aunt's house. Amy is reluctant, but accepts.

They realize quickly that neither of them know where Nick lives. Molly calls Jared (Skyler Gisondo) who is a wealthy classmate who likes her. Thinking that they want to go to his graduation party, he takes them to an elaborate party he's throwing on a yacht, complete with extravagent giftbags, DJ and his drug crazed friend, Gigi (Billie Lourd), They escape from that party and Amy is ready to call it a night, having fulfilled their mission of attending at least one graduation party, but Molly calls a 'Malala' which is their code to unconditionally do what the other wants to do. They call a Lyft an are surprised to be picked up by their principal (Jason Sudeikis) and taken to what they believe is the right graduation party, but ends up to be another graduation party, this time at their classmate George's (Noah Galvin) house who is having a murder mystery party. They end up tripping on drugs at that party and finally after another series of misadventues, they wind up at the correct party and that's where things go sideways for the intrepid duo. Molly's crush, Nick winds up  making out with Amy's crush, Ryan- and the two fight with Amy revealing her resentment at how controlling Molly is of her life and revealing that she's taking a full gap year to go to Bostwana and Molly accuses her of ruining everything. Amy runs off to the bathroom to cry and Molly leaves.

Amy ends up making out and almost having sex with another girl in her class, Hope (Diana Silvers)- but winds up vomiting on her instead. Molly gets a ride home from Triple A (Molly Gordon) who has a reputation for promiscuity and the two bond over stereotypes they've both suffered from. When the cops break up the party, Amy heroically creates a diversion with the cops so other people can get away and get arrested for it. When Molly wakes up on graduation day, she sees that Amy is being hails as 'the cool kid' for taking the fall and goes and buries the hatchet with her friend, getting her out of jail and racing to graduation where she gives her valedictorian speech (and kisses Jared as well.)

Before Amy leaves for Botswana, Hope comes over to give Amy her number and she and Molly go out for pancakes as a farewell before she leaves.

At the same time, though, I get where the Audience Score is coming from as well. It's a little bit of a flimsy metaphor that probably does a disservice to both movies, but this is like, well, Superbad but with women. Trade dick jokes for vaj jokes and sprinkle some feminist hero worship on top of it all and you're not too far off the mark.

So as a viewer you're left with some conflicting feelings about this movie overall, and there's kind of part of you that wants to be 'meh' about it all- but at the same time: it's smart. It's funny. It's so damn refreshing. My Grade: *** out of ****.