This Week In Vexillology #295

October 05, 2019
It's been awhile since I've done this on a regular basis, but I had to do some planning first.  I'm not going to lie: it's getting harder and harder to find new flags to get excited about- at least excited enough to write about it. But I've got the next six posts more or less planned out which will get us to #300 and after that... we'll see.

In the meantime, things are going to get weird. I don't mean that in the sense that any of these places are weird- I've never been to most of these places, but they're the unrecognized countries, the ones at the margins with the exotic names and sadly, many of them has a brutal, bloody history to go along with their flags. These are the places you've gotta go looking for. 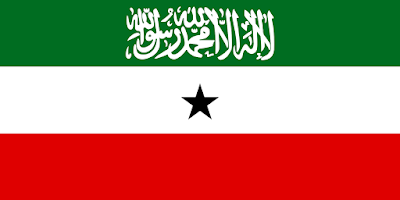 So, funny thing about Somalia. Before 1960, there were actually two of them. British Somaliland and Italian Somaliland. One assumes that folks decided that one Somalia was better than two- so the two Solmaliland's became one big Somalia. When the Somali Civil War started un 1988 and eventually lead to the collapse of the government, Somaliland declared independence- and you know what? It's done a fairly decent job of it since then. Democratic elections, government, law, order-- the only catch is that no one seems to want to recognize them as a sovereign nation. (From the International Community's point of view, I kind of get it. You want a peaceful, united Somalia. Not two or three Somalias. From a historical point of view, when you consider that too many borders in Africa were drawn by old white dudes just randomly drawing lines on a map, that argument loses some of it's luster and if Somaliland is peaceful, democratic and stable- then why not?)

(Just as a mild parenthetical: if you think of the shape of Somalia as a '7', Somaliland would be the short stubby horizontal part of the number.)

Let's talk about their flag-- adopted on October 14, 1996 as the national flag, it's a horizontal tricolr of green, white and red with a five pointed black star and the Shahada (the Islamic Declaration of Faith) in white on the green stripe. (There's also a variation that uses orange instead of red- which I kind of like better.) Can't really find any solid meanings behind it, it's not too much of a stretch to say that green stands for Islam-  which is where the Shahada is. The combination of green-white-red are seen as pan-Arabic colors and the black star has been seen as a symbol on other African flags.

Next up, Kaliningrad Oblast: 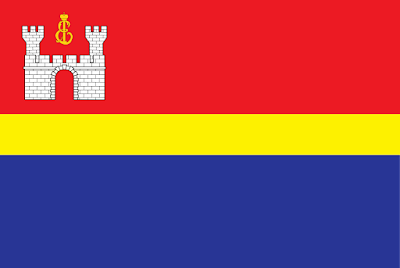 Kaliningrad is that random little Russia exclave that's now sandwiched between Poland and Lithuania and used to be the old heart of Prussia back in the day. Present day Kaliningrad was founded as a military fortress in 1255 after the Prussian Crusade by the Teutonic Knights. It's the birthplace of Immanuel Kant and was closed to foreign visitors for awhile as the Soviet Baltic Fleet was stationed there back in the 50s.

There's not a lot of information about the flag- at least, formally speaking. It was adopted on June 9th, 2006  and depnding on who you talk too, the silver fortress stands for hospitality, the dark blue for the Baltic Sea and tranquility, the yellow for the wealth of amber. The red stands for 'the active man principle' (whatever that is) OR, the bellicose past of Prussia, the Red Army, the Hanseatic League or the historical connections with Brandenburg and Poland. So there's a veritible smorgasbord of options to choose from.

And that's the flags of Somaliland and Kaliningrad! Remember until next time, keep your flags flying- FREAK or otherwise!