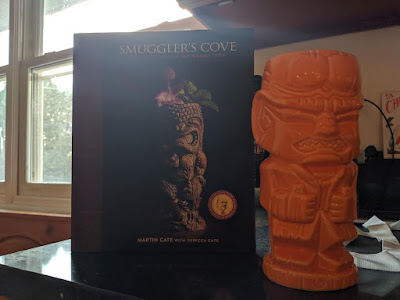 I never thought I'd be writing a post where 'Boozehound' intersected with 'Bookshot' but here we are to take a peek into the strange and exotic world of tiki with the excellent and lovingly knowledgeable book, Smuggler's Cove: Exotic Cocktails, Rum and the Cult of Tiki. Written by Martin and Rebecca Cate, the founders and owners of one of the foremost Tiki bars in America today, San Francisco's Smuggler's Cove, the two of them take the reader on a journey into the origins of the tiki, the hidden depths and complexities of rum and the rise, fall and eventual revival of tiki over the course of the latter half of the 20th century.

Why the sudden interest in the secrets of tiki? Well, two reasons really- one is that over the course of the past few years we've had a stop or two at Psycho Suzi's Motor Lounge up in Minneapolis and the experience was incredible. The pizza was tasty, the drinks exactly what you'd expect and more- the place is out a wee bit from downtown Minneapolis and looks like it was built in a former church and I highly reccommend it. The second reason is that I saw a set of Star Trek themed 'geek tiki' glasses and threw them up on the old Amazon wishlist a couple of years back and someone actually got me them for my birthday.

So the way I see it- I've been to a tiki bar and enjoyed the experience, I've got this set of tiki glasses that I want to actually use from time to time- so it only made sense to me to try and get some more knowledge about tiki and find out what it's all about.

From a historical point of view, it's a fascinating trip: The Cates lay out the backstory of the two great titans of the early tiki movement: Donn Beachcomber and Trader Vic Bergeron. The two men have different stories but made equally important contributions to the emergence of tiki in the pre-war and post-war years. Donn Beachcomber kind of caught the initial wave: post-Prohibition the nightclub era of dining was sort of fading out and people were intrigued by an establishment that provided the same excellent food/drinks but didn't require you to wear a suit. Vic sort of took that and added his own flair before partnering with the Hilton hotel chain to get Trader Vic's all over the country.  The end of World War II only intensified the interest in tiki as returning soldiers had served in and seen the paradise the tiki talked about themselves.

By the late 60s and early 70s, the culture was changing-- though in a fascinating tidbit, I learned that Richard Nixon was a fan of Navy Grogs and used to slip in to a Trader Vic's late at night and pour 'his heart out' to the bartender during the Watergate scandal. (No secrets, the book advises, were every divulged by the bartender.)

Tiki kind of faded out into the 80s, but enthusiasts across the country harnassed the power of the internet to create a revival that is now in full bloom as we head into the second decade of the 21st century.

The story of tiki has to go hand in hand with the story of rum. I should have known better, but it really was surprising to learn about the complexity and the depth of rum-- the news that Captain Morgan was only introduced to the United State in 1984 means that a lot of the original recipes in this book don't use spiced rum at all- in fact, most of them don't. The book also covers the origins of rum, the differences in rum and what the difference between rhum and rum are. (The former is from Martinique)

The Cates don't just talk about the history of the movement though: the offer insights into the design aesthetic of tiki and how they created their own bars-- they offer resources and advice for those who want to start their own tiki bars and talk about the various tiki gatherings around the country that helped spur the revival in tiki. Of course, interspersed in between all of this knowledge are more recipes than you could possibly imagine.

Overall, this volume delivers. You find out everything you could possibly want to know about tiki and then some- and you get recipies aplenty to boot. Will it persuade you to start your own tiki bar? That, I don't know...  the Cates are refreshingly blunt about it: this is an expensive vice to have. And even when you get to the nitty gritty of the actual cocktails themselves, there are a lot of ingredients. There are a few relatively simple ones you can start with, but building from there will take creativity and probably a lot of searching on the internet for the right ingredients. That said, the allure of tiki is strong- especially with winter looming in a few months- just know that a vice like this is going to be a marathon and not a sprint. All of that said: there's a reason that this is a volume that everyone reccommends for anyone looking for more info on tiki- it's excellent from start to finish. My Grade: **** out of ****