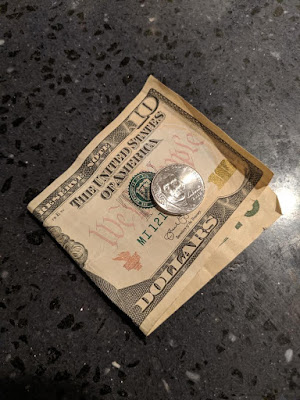 Every time we'd sit down and do our taxes and the tax lady would ask us if we wanted to throw a couple of bucks at the Presidential campaign fund, I would respond with a firm 'No.' In general, I felt that there were few, if any politicians that had done anything worthy of my money and I sort of took the attitude of, 'don't give them money, it'll only encourage them.'

The interminable march toward next November has been underway for months now. At this point in the cycle, I don't know much. I may not pick a candidate at all. I might make the decision right then and there in the voting booth next year and just let it go. It might be dependent on what the polls look like in Iowa. It might be dependent on any number of factors I haven't even considered yet. But I know two things for sure:

1. I'm not voting for a billionaire.

2. I have real problems voting for someone who wants to eliminate private insurance.

The latter point isn't because I don't think we need to do something about health care. We absolutely do. It's ridiculous that people are rationing insulin. It's ridiculous that a hospital bill can bankrupt you in this country. And maybe the moment does call for big and bold thinking. Maybe radical solutions are all we have left- but for me, Medicare For All or single payer is like jumping off a cliff. You can't expect me to sign on to something that big and that radical without knowing if there's a parachute available for me and my family. We've got a second mortgage payments full of student loans to deal with. The last thing I need right now is to have the government completely fuck over my health insurance- even if it might be for a good reason. (I'm also not thrilled about the prospect of higher taxes to pay for it all, either- but that's an entirely different post.)

In general, I want someone who wants to get things done. I don't want a radical. I don't want an ideologue. If I'm more center-left in my outlook, I want someone who reflects the values of what 'blue state' governance should look like for the 21st Century. The easy answer people give is California. It's always California versus Texas in our big ugly battle of red states and blue states- but to me, the real model for 21st Century Progressives/Democrats isn't the Golden State, it's Minnesota.

Does it have the racial diversity that California does? Probably not. But it does have a balance of rural and urban areas. It's got suburbs. It's got farmland. It's got forests. It's got miners up in the Iron Range and a port up in Duluth. To win in Minnesota, you've got to win a wide variety of political environments and to govern successfully the state is more of a balancing act of a variety of interests than people might realize. I want a President that wants to govern. I want a President who is going to get things done- and do their damnedest to accomplish what is actually achievable and not just rail against fantasies that are unattainable in the present climate and more importantly, I want a President that can actually win next year.

We're not exactly flush with disposable income at the moment, but what we did have was a garage that was chock full of cans that needed to be returned. It's been on my to-do list for months, but the more I read the news and the more I watched the debates, the more I decided that it was time to put our money where our mouth was for once.

So, I pitched the notion to the Missus and she was in full agreement. I took the Eldest Kiddo down to Hy-Vee and spent a good forty-five minutes to an hour working our way through the back log of cans and ended up with precisely $10.05 and this past Thursday, we made it official and gave exactly that amount to the Presidential Campaign of Senator Amy Klobuchar.

I straight up miss having her as a Senator and I know she'd make a damn fine President.